Posted on Feb 22, 2014 in Down Syndrome, Education, Health, Motherhood, The Fam

Whitney had her first ballet class on Thursday.

I was amazed at the class! The teacher is fantastic, leading the kids through real ballet (I mean real…french, twirls, arabesques, spotting) in a fun way that they were all trying their hardest to mimic.  I really like how it was taught.  Whitney did okay.  She had moments where she was up there copying what she saw, and then there was when she went over and sat with that other family against the wall, and the last 20 minutes she spent on my lap sucking her arm and trying to get to snacks in my purse. I had mixed thoughts during the class but now that I’ve had some time to think about it, I’m really glad we’re doing it and think Whitney is going to love it and that it will be a great experience for her (and everyone else involved). 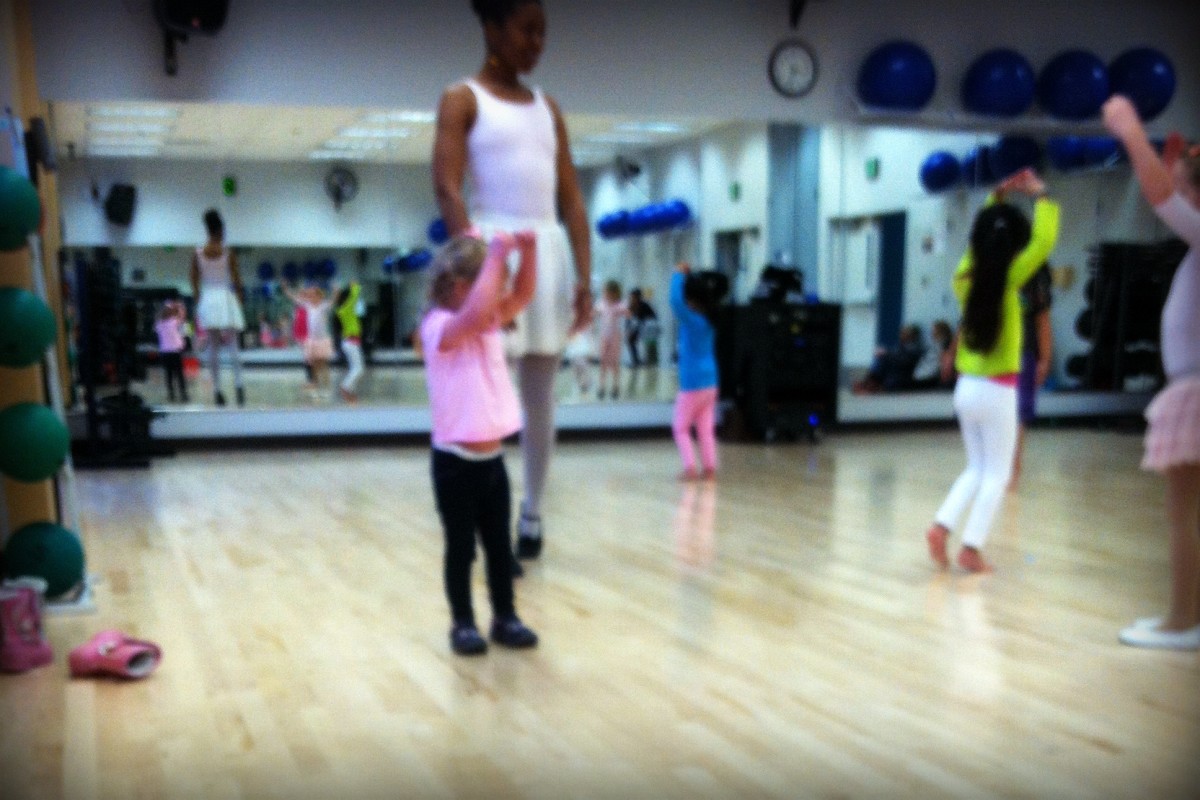 I tried to snap a shot discreetly with my phone.

This first class surfaced a lot of thoughts related to mothering a child with special needs.  It may be interesting or possibly helpful to let you in my head for some of these thoughts (warning: unfiltered for political or perfect-mommy correctness):

What do I tell the teacher?

Teacher asks Whitney her name, Whitney stares back.  I say, “Whitney. She has some communication difficulties.” Teacher is really friendly, encourages me to just leave her for the class, she’ll be fine.  While at first I hoped that I could leave her (and let her be independent) and just sit outside in case I’m needed, once I was in there I realized there’s no way I can leave…she’s not really ready for this.  The room is huge. The door is open, she might just decide to walk out.  In my brief interaction with the teacher I realized it’s hard to figure out what to tell her – it’s obvious Whitney has Down syndrome, but in what ways is that relevant to this class?  Does the teacher need to know Whitney’s wearing a diaper?  Should I describe her communication skills or cognitive functioning?  Do I explain that she is really flexible but doesn’t really jump yet?  I guess it’s helpful to know she’s deaf in one ear, since it’s going to be harder for Whitney to pick out the teacher’s voice with all the other voices and music in the background.  I didn’t really say any of this beforehand.  Afterward I said I was worried about leaving her because she might walk out of the room and mentioned her hearing concerns.  Should I have mentioned more?

Is she too distracting?  Is she hindering the experience of the other kids?

We walked in and the teacher was putting down pieces of tape to show the kids where to stand.  Uh oh.  She is not going to get that (at least not without a lot of help, demonstration, and reminders).  Whitney wandered around, she got up close in other kids’ arabesque-zone.  She wandered over to their parents, she sat on the ground and sucked her arm and didn’t acknowledge the question of what her name is when the group was making a big circle.  I worried about what people thought.  Did they question her age? Did they think I should walk up and put Whitney on her spot?  Did they think I was just letting Whitney be a free-spirit and that their girls were distracted or tempted to shuck the rules like Whitney?  Probably not, but I sat there in paralyzed hesitation most of that time wondering if I should intervene or just sit there and let it be.  I did some of both.  But I did wonder if maybe the other kids would be better off if Whitney was not in the class.

When Whitney saw the students copying the teacher she walked up next to the teacher (facing the students) and started copying too.  It was adorable!  She was raising and lowering her arms and feet, turning her body.  Everything was a second delayed so she was still reaching for the sky when the teacher was reaching for the ground, but the other students were all at their own pace as well.  I was so proud to see her trying.  It was great coordination practice, and could be helpful in building up her strength, too.  The teacher went up on her toes with her hands in the air and tip-toed toward the mirror and Whitney shuffled along with her and all the other baby chicks.  I just about died it was so cute.

She’s getting lost.  She needs special attention.  She needs a buddy, a 1-1 aide? Maybe this class isn’t equipped for people like Whitney.  Maybe she doesn’t belong.

The second half of class had instructions. They were making a circle holding hands and she walked up behind two girls but they didn’t see her.  She was outside the circle.  She didn’t say anything.  The teacher saw her and they opened up to let her in, she came in but didn’t grab hands (did she understand?).  I thought, she could do this.  She could make the circle, she could try the “drills”, if only the teacher looked directly at her to explain stuff making sure she was paying attention.  Or what if she had a buddy who brought her along and demonstrated, showing her and telling her how to participate?  OMG, I’m wanting a one-on-one aide for my girl’s ballet class.  This is what happens in school – parents want their kids in with the typical kids but then require a special aide to help their kids stay connected with what’s going on.  I roll my eyes at myself because this is a recreational class, it seems ridiculous to think of requiring such modifications to help Whitney.  But at the same time, I know that special attention from the teacher, or a buddy of some sort, would make a huge difference in helping Whitney participate fully in the class.  It could make the difference between doing the class at all – or not.  I’m starting to understand more of the dilemma of integration.

Maybe she doesn’t like it.  Maybe I shouldn’t have woken her up from her nap to do this.  Maybe she feels out of place.

When she got to the circle she just sat there, all the other girls standing around continuing to copy the teacher.  She looked tired.  She scanned for me and when she saw me she got up and walked straight through everyone to sit on my lap.  Perhaps this is a waste, good thing it was cheap.  I bet everyone thinks we won’t come back.

The teacher came up afterward to ask what I thought, she was positive and thought it was good when Whitney was trying to participate.  She didn’t say anything about Whitney not staying on her spot, she didn’t say she thought Whitney might be too young.  She didn’t say anything except that she thought it was good and seemed to be excited for Whitney to come back.  I had worried that maybe Whitney isn’t supposed to take a class like this, maybe she’s not ready.  But then I realized that it’s all so new for her right now, and each time it will be more familiar.  Whitney has braved new situations before and once she knows the routine she is a rock star.  She can learn to stand on her “spot”, it will take some instructions and some reminders from the teacher (and maybe some practice with a “spot” at home), but she’ll be able to do it.  She can interact with friends.  She may not talk much now, but she can be engaging and friendly.  I thought about how good it is for Whitney in all areas – listening, watching, physical coordination, strength, socially.  I thought about how excited she gets to dance at home and how much she loves music.  I realized that I’m paying for this class, and it’s worth it for Whitney to even enjoy part of it.  And if she were taking away from the experience of the other kids then the teacher would intervene, it’s her job at that point, not mine.  I also realized that this might be these people’s only interaction with someone with Down syndrome, and it’s good for them to get to know Whitney and realize how wonderful (and capable!) she is.

This is a 6-week class, and then there will probably be another after that and so on.  When I think about today I’m a little bit intimidated by the challenge of helping Whitney participate fully.  But when I think about showing up to class two or three months from now I am excited because I see a confident little girl marching in to tendu and arabesque the best she can, smiling and cheering with her new friends, and showing us all that she can do it. 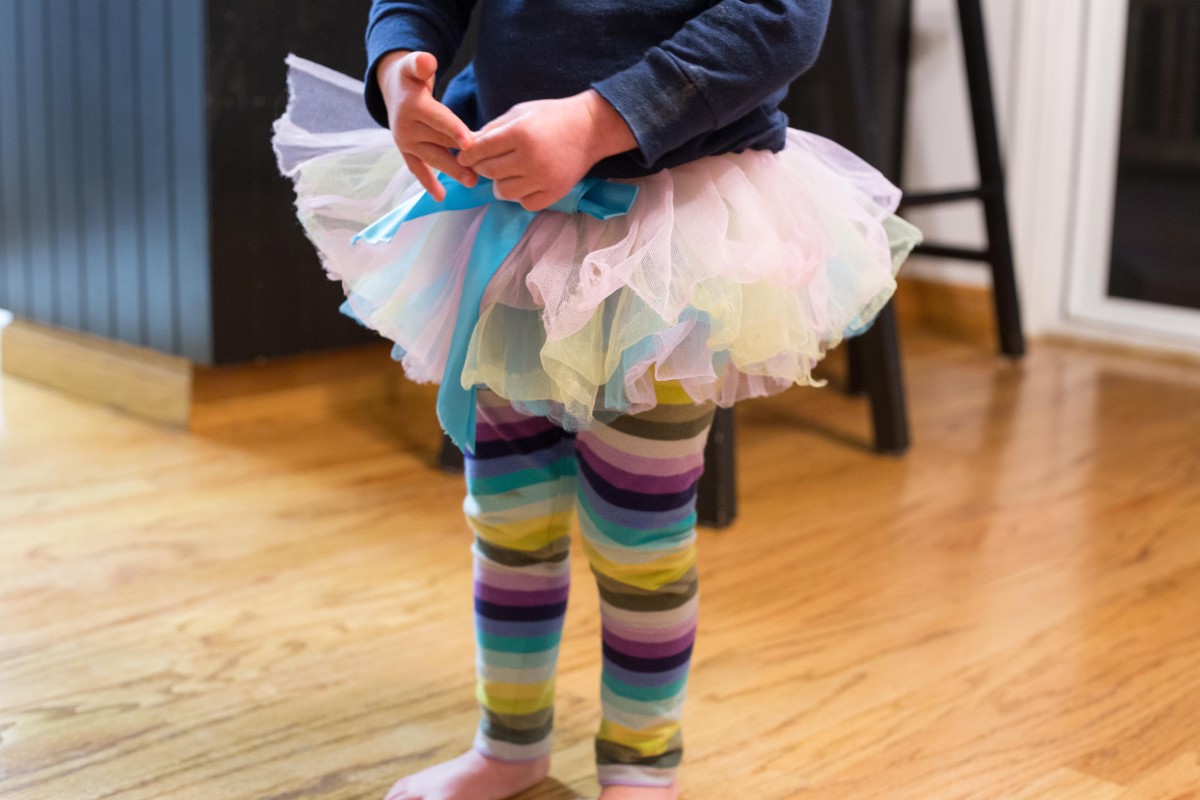 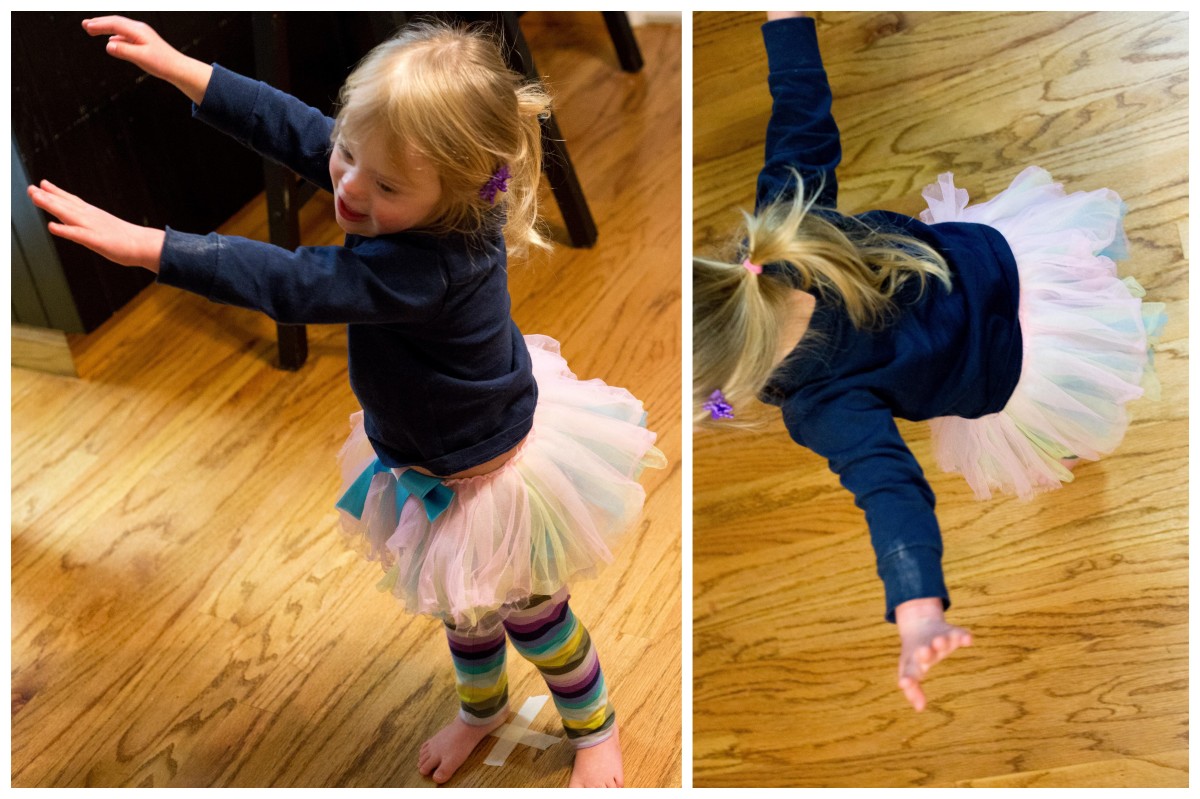 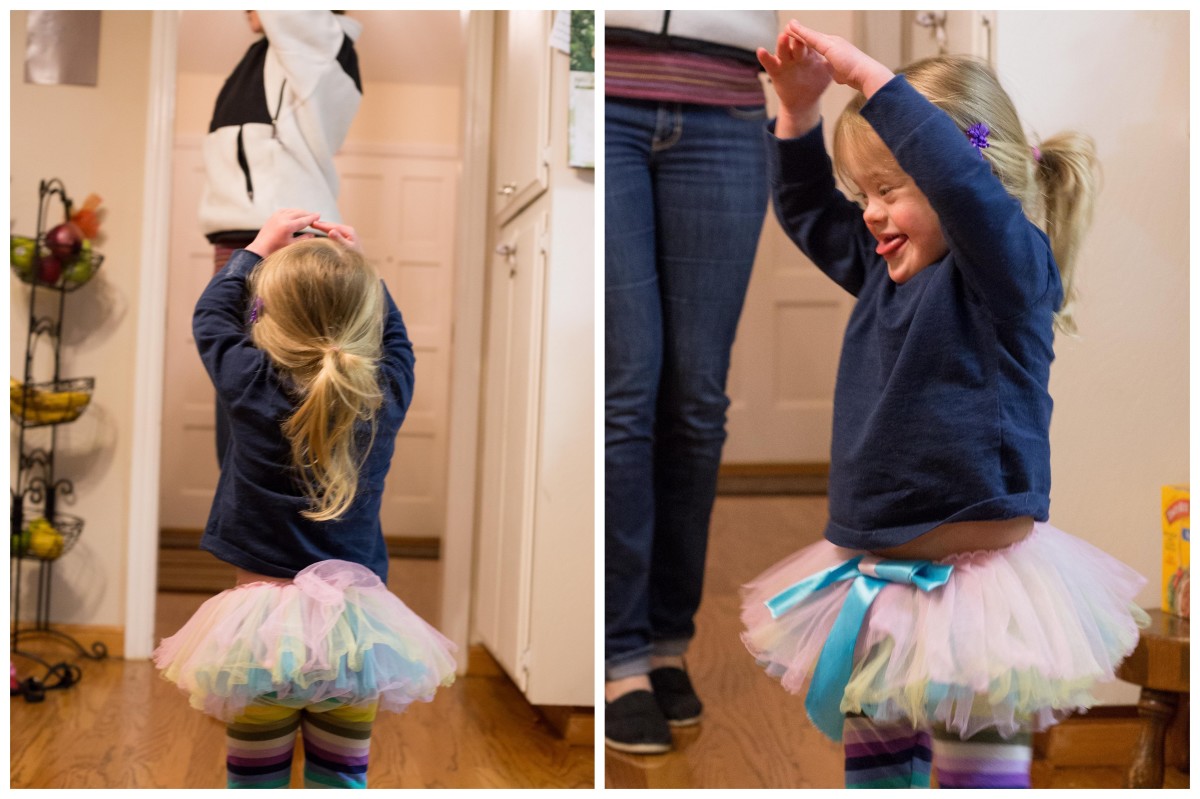