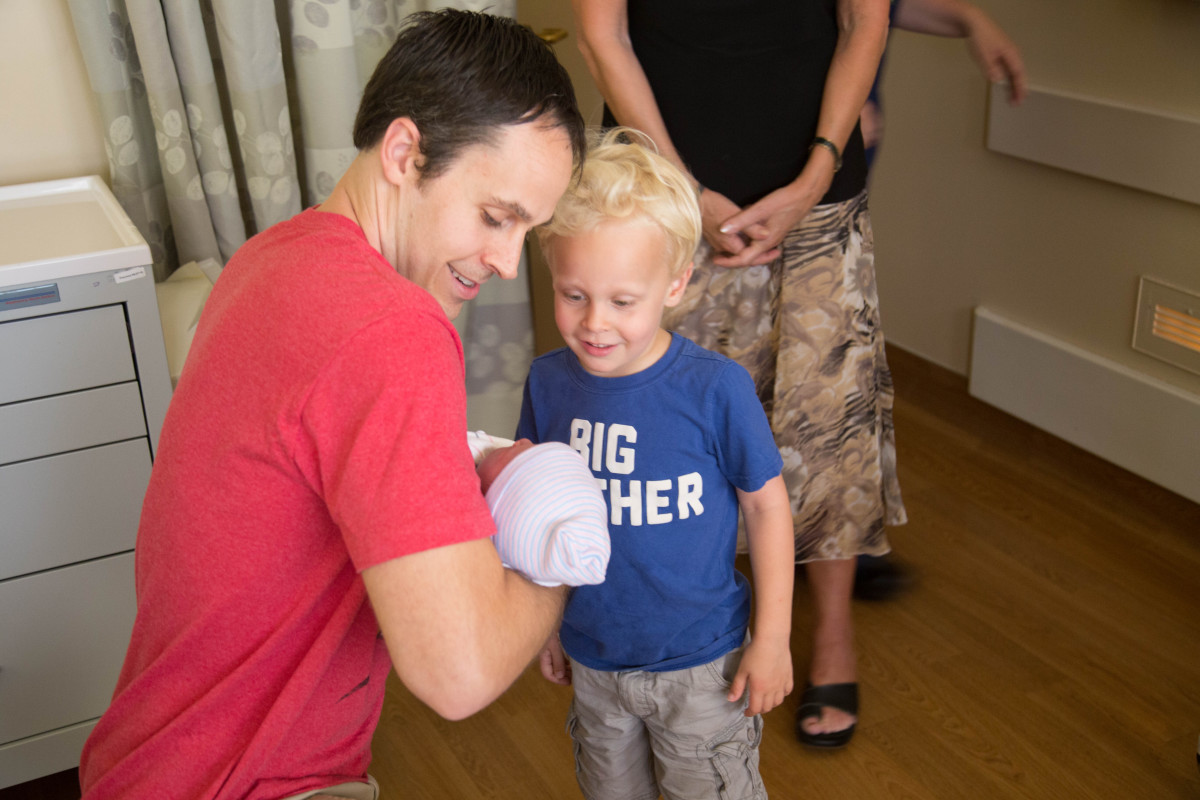 …and of course I’ve had this post *almost* done for probably three weeks now.  A third child means I am three times as slow (and patient) right?  It’s an adjustment.

Speaking of adjustments, I have been so pleased to see how Dylan has adjusted to becoming a BIG brother.  Perhaps 3 1/2 years is the perfect spacing?  In some ways I thought 14 months is perfect for the older two (although certainly challenging in many ways).  So far we haven’t seen any aggressiveness or jealousy, really.  At first, Dylan was intrigued and taking in all that was going on.  He was quick to learn her name (unlike Whitney, who spent the first 48 hours telling everyone she had a brother named Alex), and he was proud to tell everyone about her and had lots of questions about her.  He was interested, but didn’t want to touch her or hold her for most of the first week. 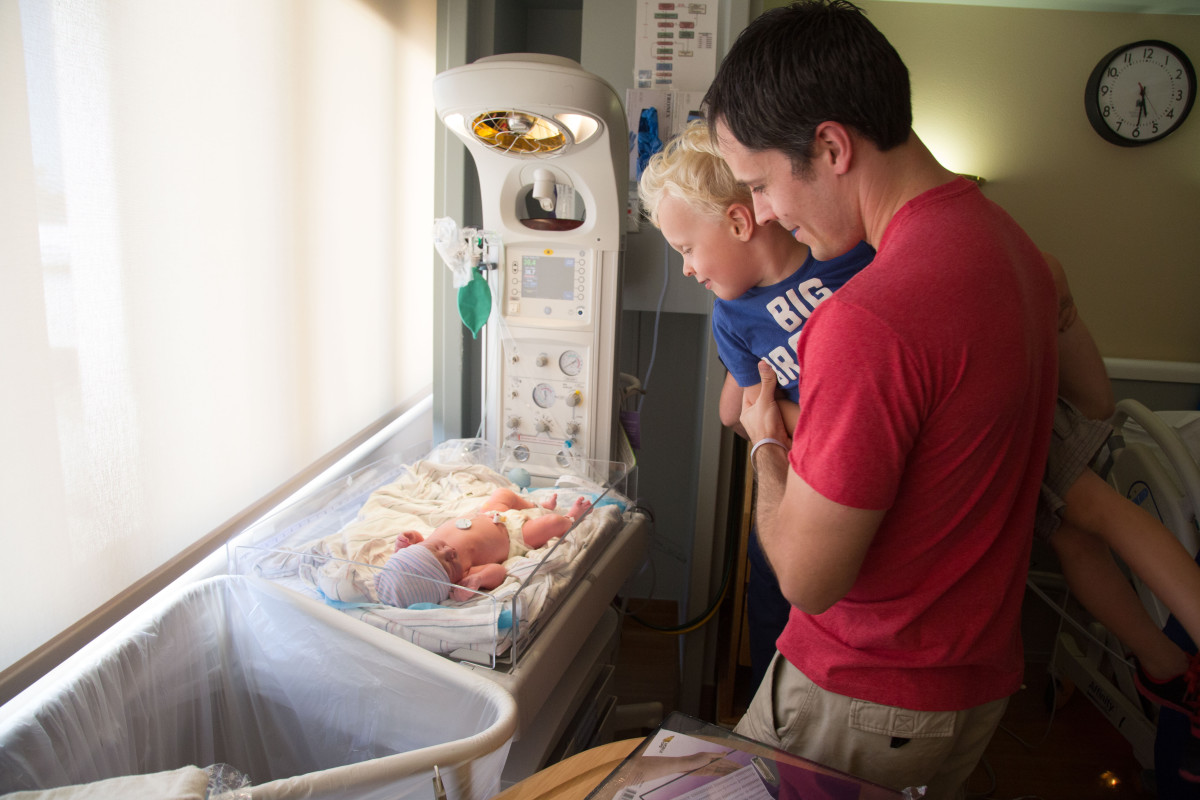 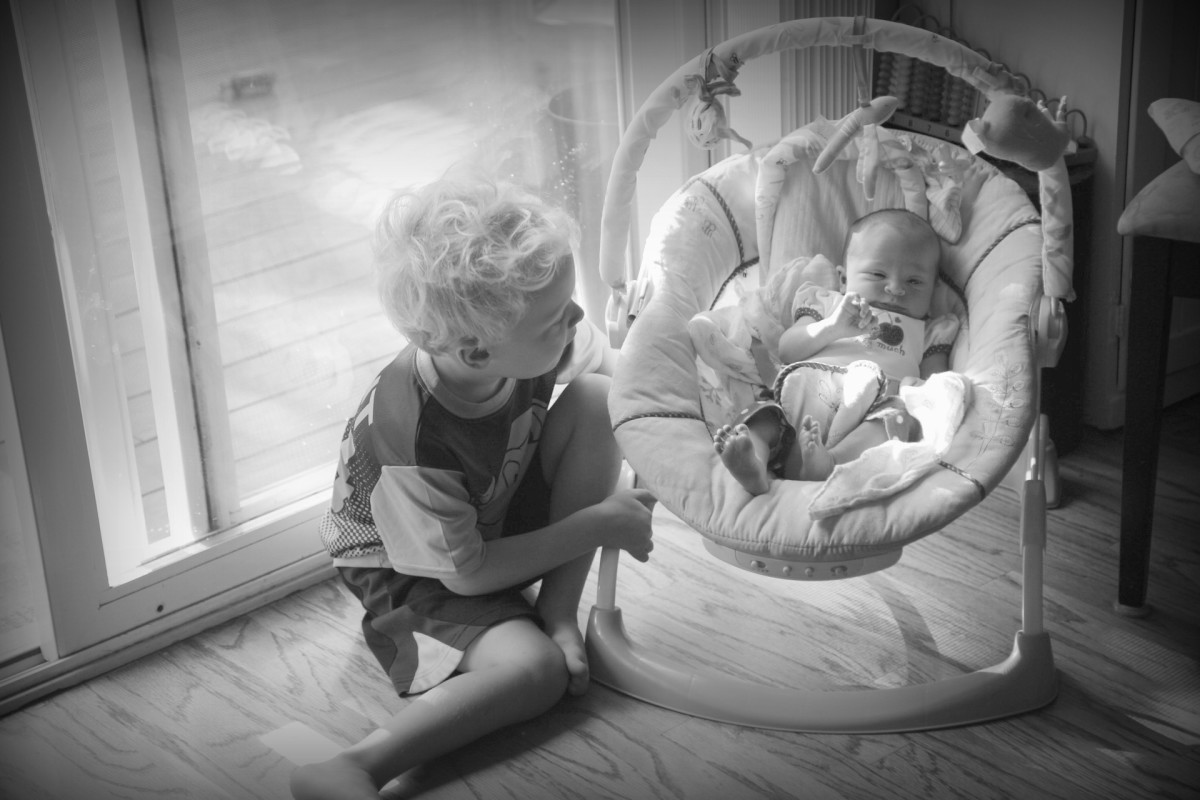 In some ways he has been noticeably more independent.  He’ll spend extended amounts of time looking at instructions to build marble tours (shown) and Legos, or work on puzzles.  This quiet play has been so welcomed, even if short-lived as by the afternoon he gets crazy from being cooped up most of the day.  I still can’t leave the room to go to the bathroom or water the garden without him immediately yelling “MOM!??” at the top of his lungs.  In all, adding a third child has been easier than I expected, when it comes to the other two. 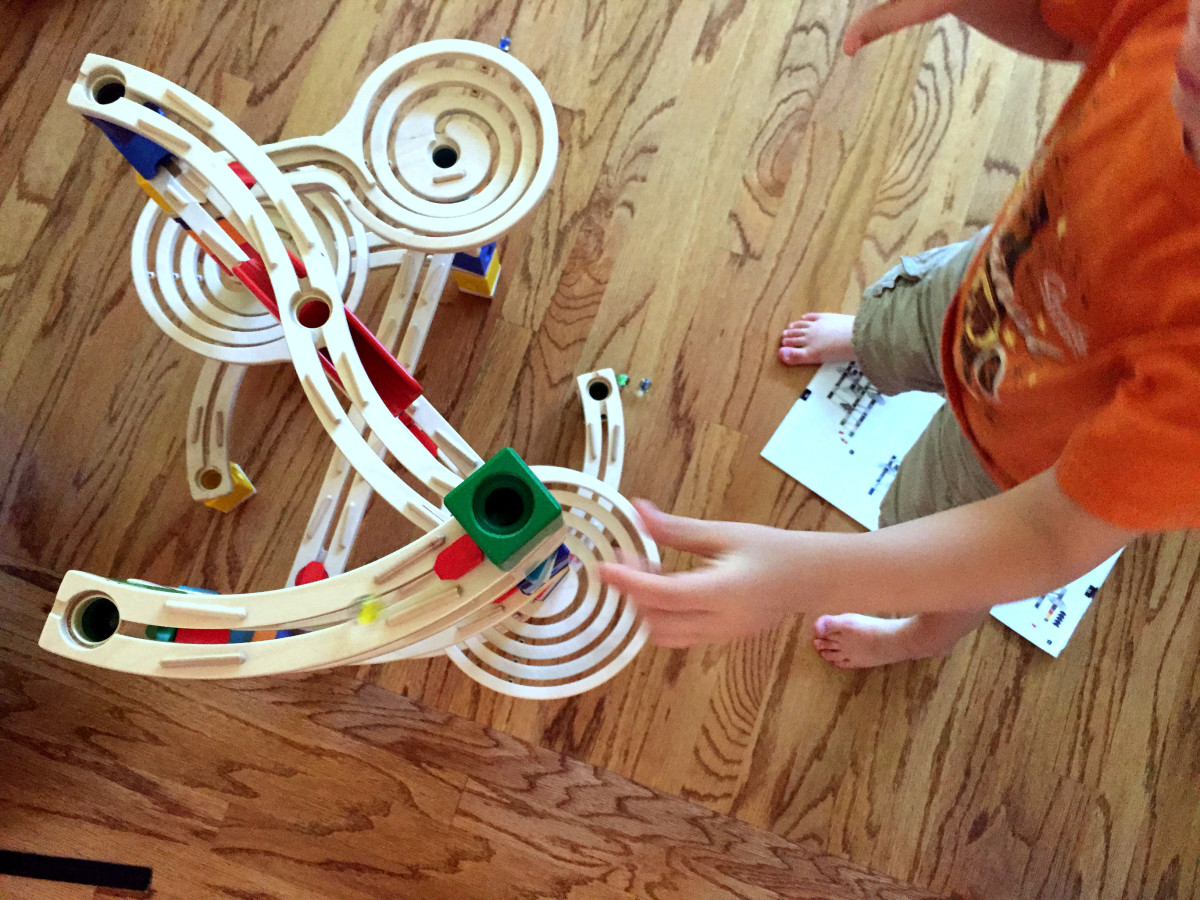 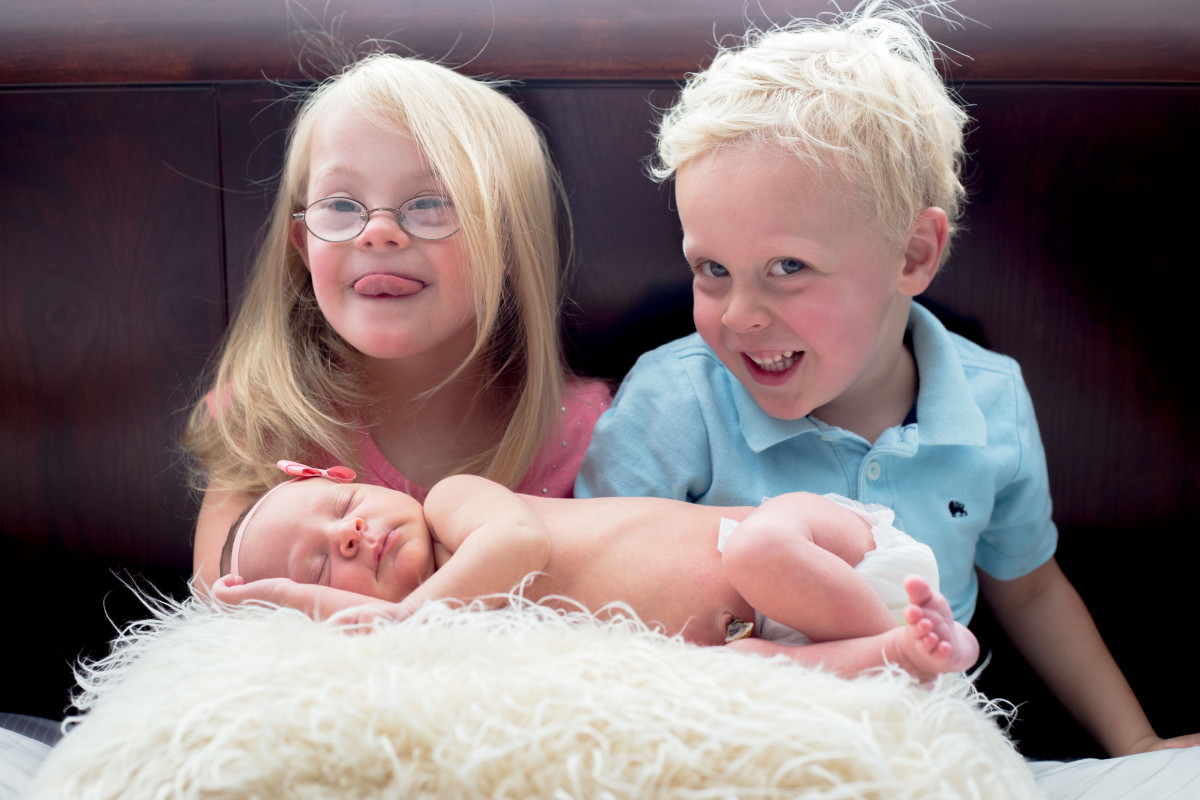 Sitting for pictures seems to go hand in hand with spazzing out. 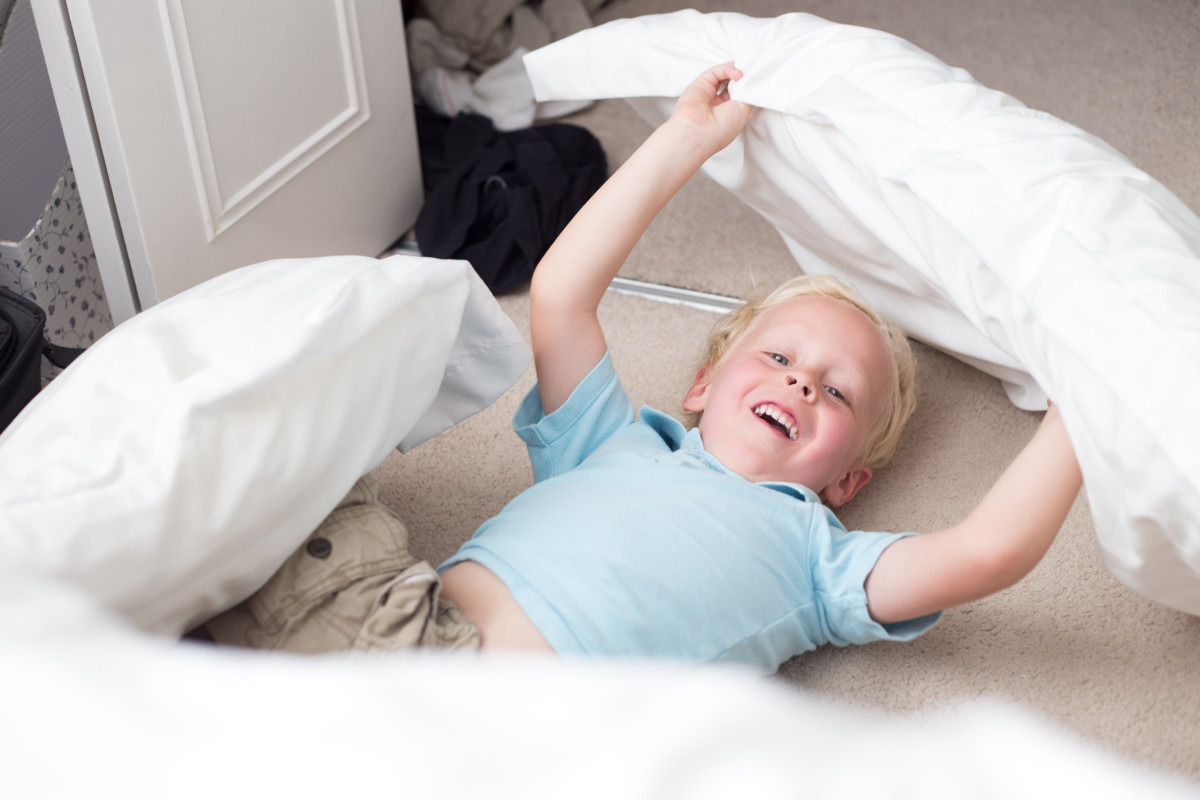 Here’s an early shot of him – one of the first times he touched Leslie – he was violently shaking the bouncer.  I started to yell at him to stop but instead asked him what he was doing and he explained he was shaking the chair to try to wake her up to see her face.  Cute.  Dilemma: encourage interaction, but also teach him that we always let sleeping babies lie.  It’s hard not to always say “no” around a baby. 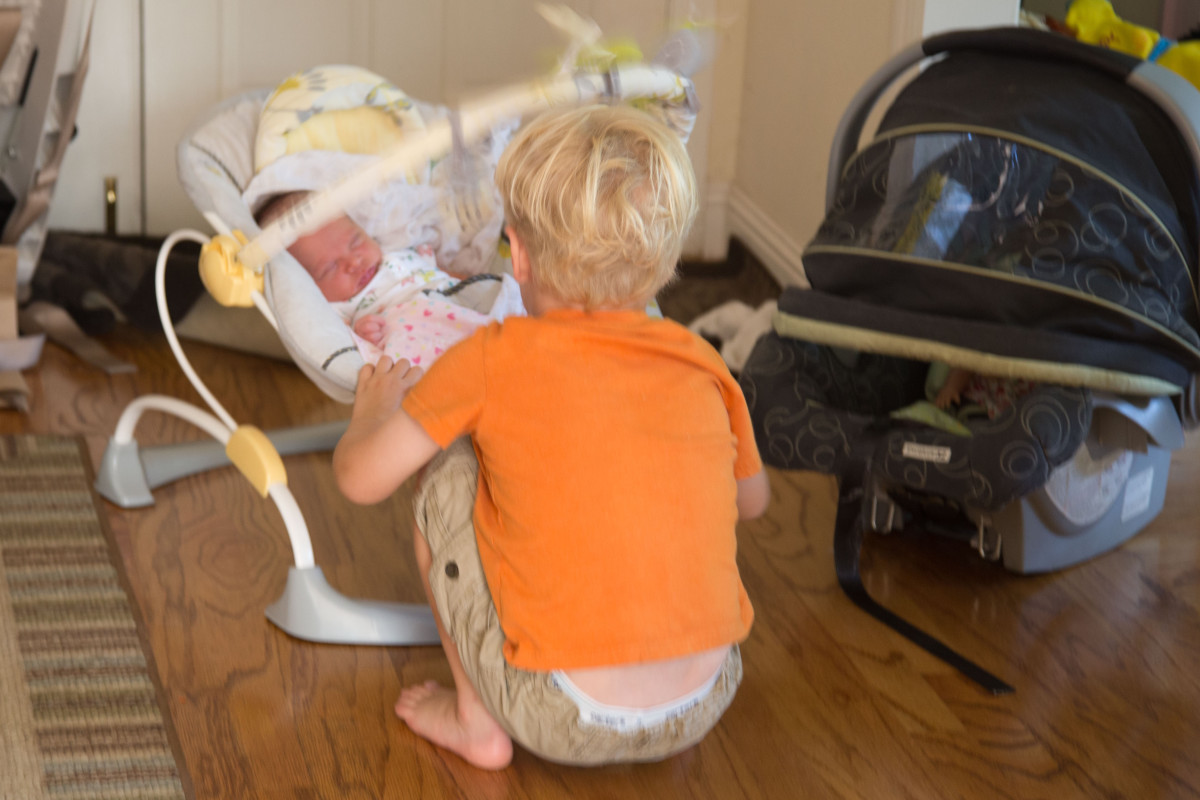 Helpful brother, didn’t want to be in any of these pictures, but wanted to make sure the L made it in place. 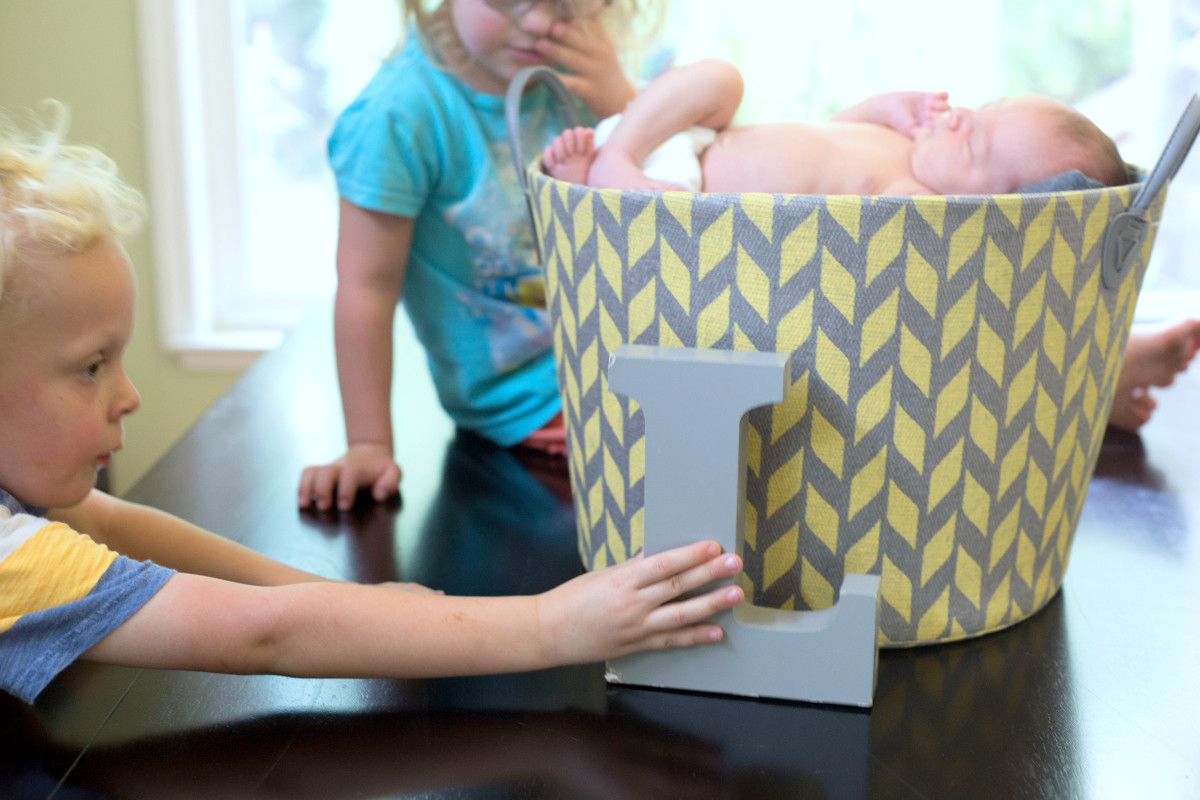 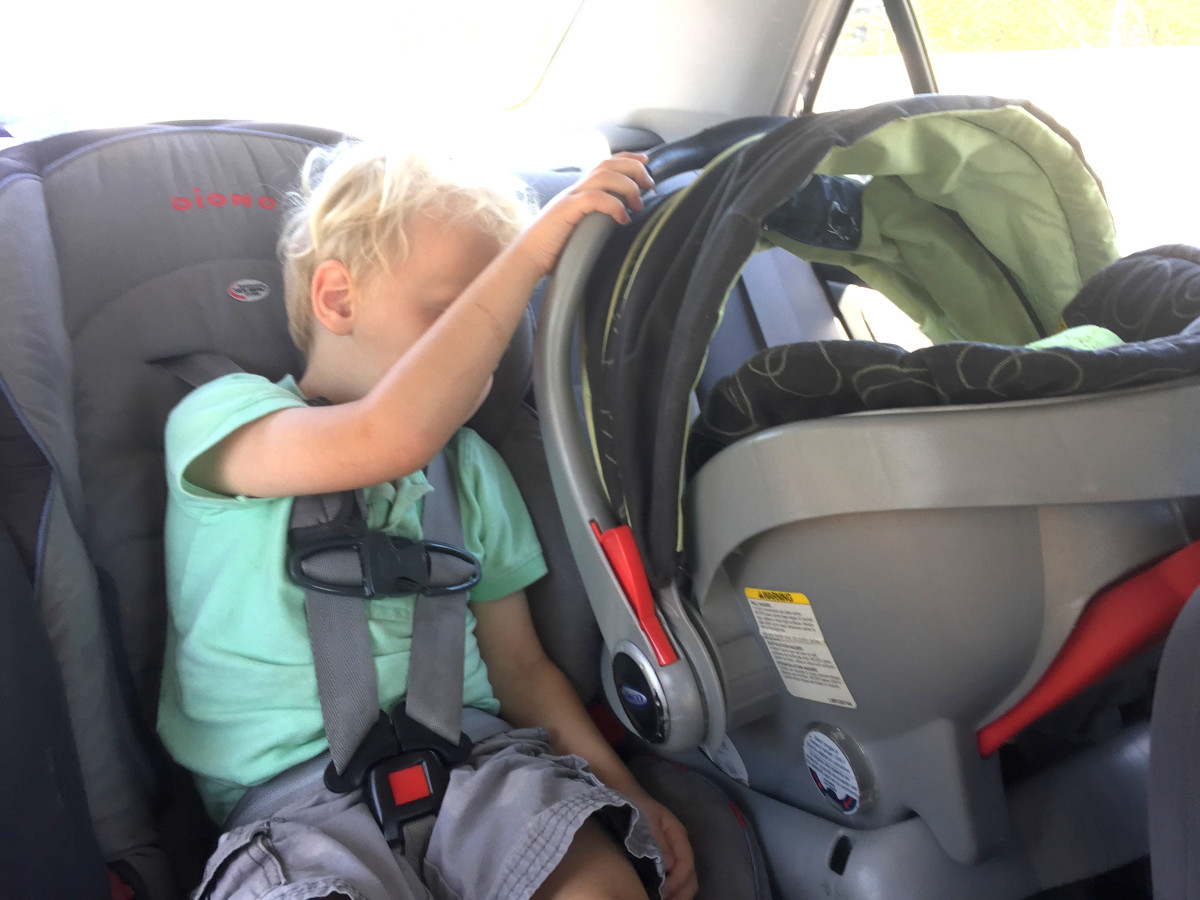 He’s been extra dramatic – working the whole spectrum of emotions: super sweet one minute and having a melt down the next.  On Friday Tyler wouldn’t let him use his phone to text (he’s a little emoticon-obsessed), so for the first time we heard the declaration “I’m running away and I’m never coming back!”  He and I spent a few hours planning his escape, talking about how sad I would be, wondering if he’d come back for his birthday party, and figuring out what I should tell his friends, and how he could manage to take Leslie with him (“I’d bring 150 bottles”).  While not a family photo for the fireplace, I like how this shows the drama.  He never naps, but this day he put himself to sleep about five minutes after this photo – sometimes it’s just time to crash. 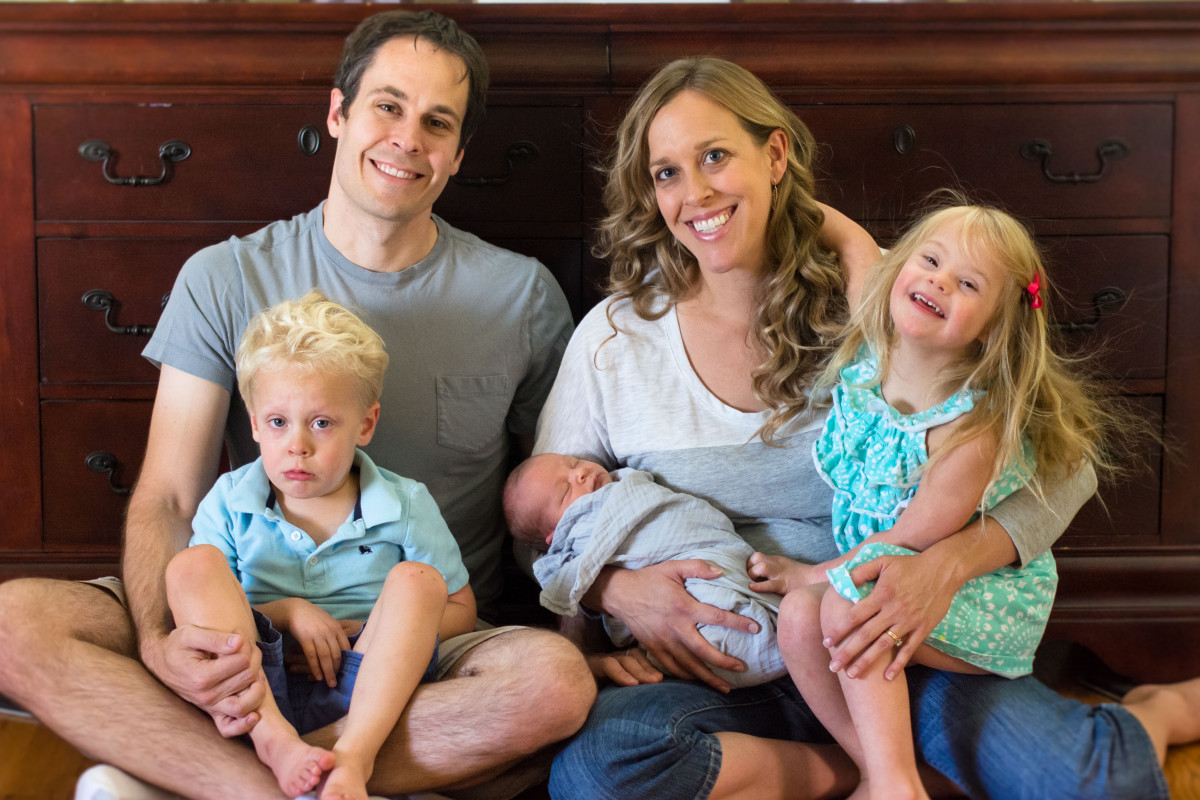 Here he’s intrigued by bath time.  Whitney, Dylan and their cousin were all crowded around quietly watching Gramby’s every move. 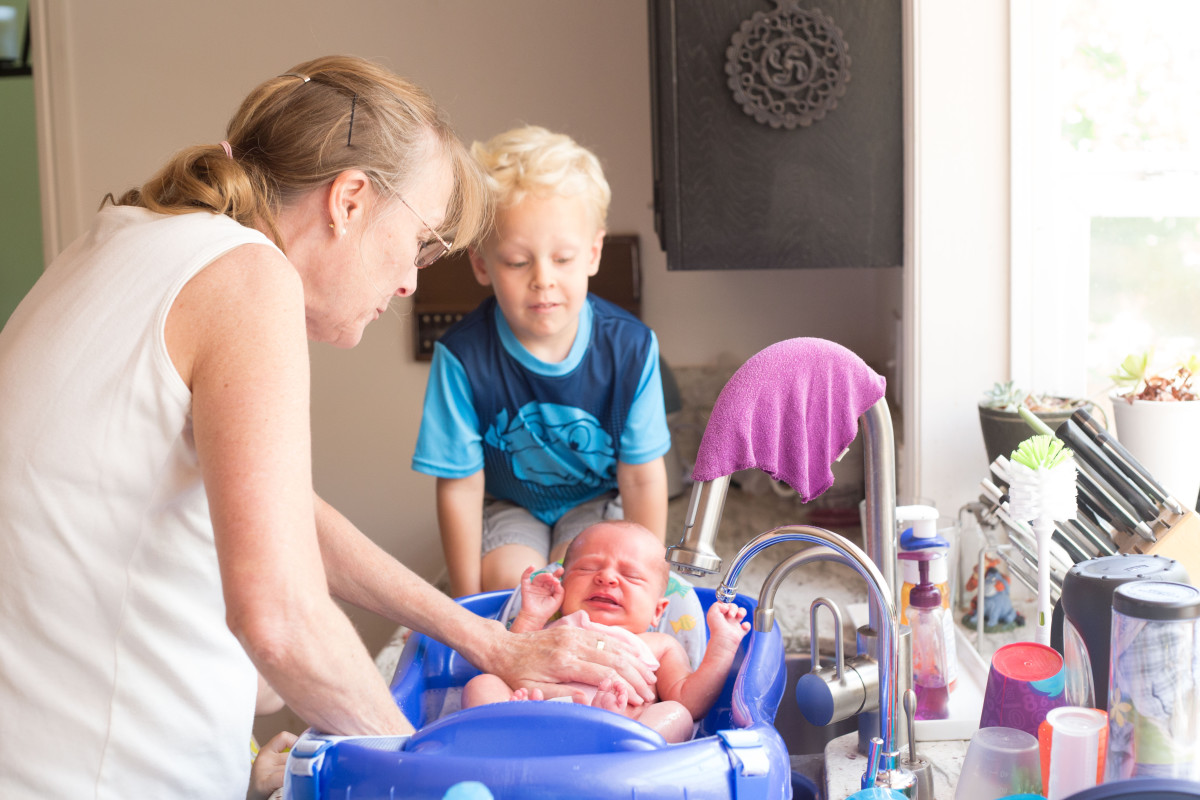 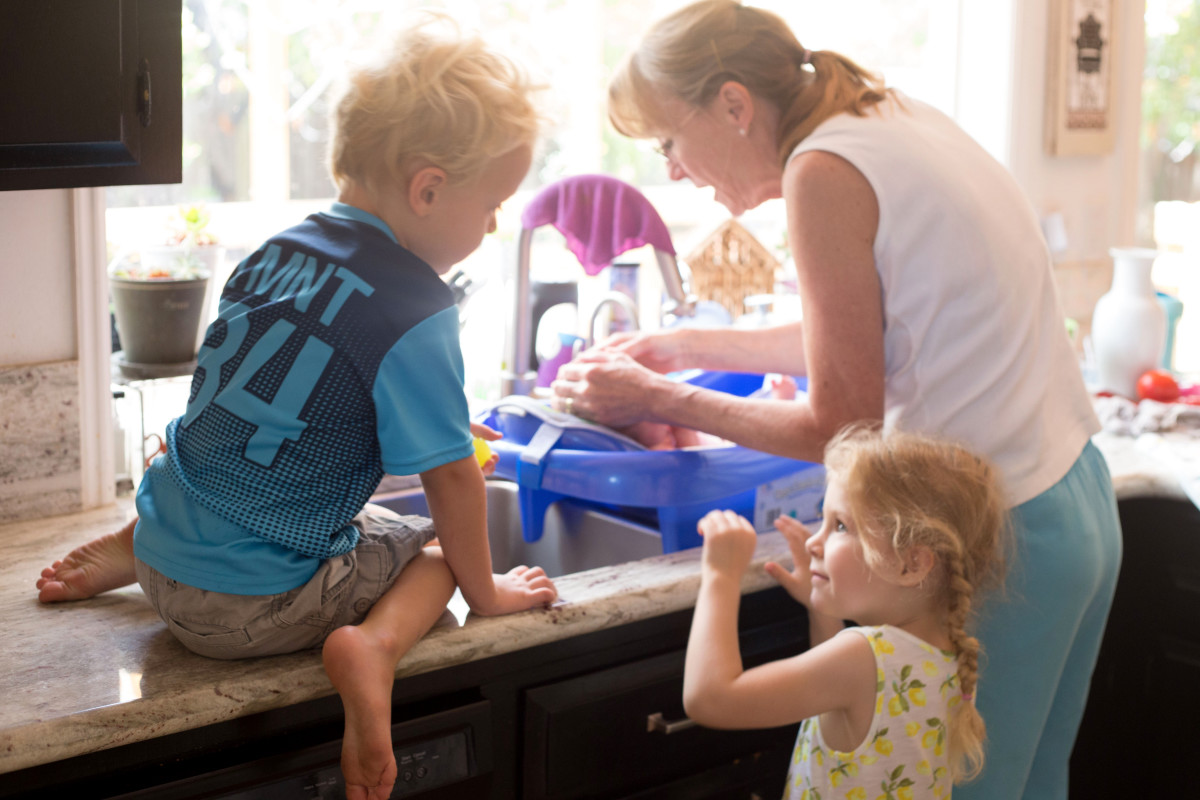 And this is the first time he held her.  He wanted me to get something for him so I said I’d go get it but he would have to hold Leslie while I was busy helping him.  He agreed and I grabbed my camera. 🙂  He was gentle as could be.  And he’s happily held her many times since.  It seems like he’s proud to take care of her.  The other day he was singing “Leslie, Leslie, I love you” to her in the car. 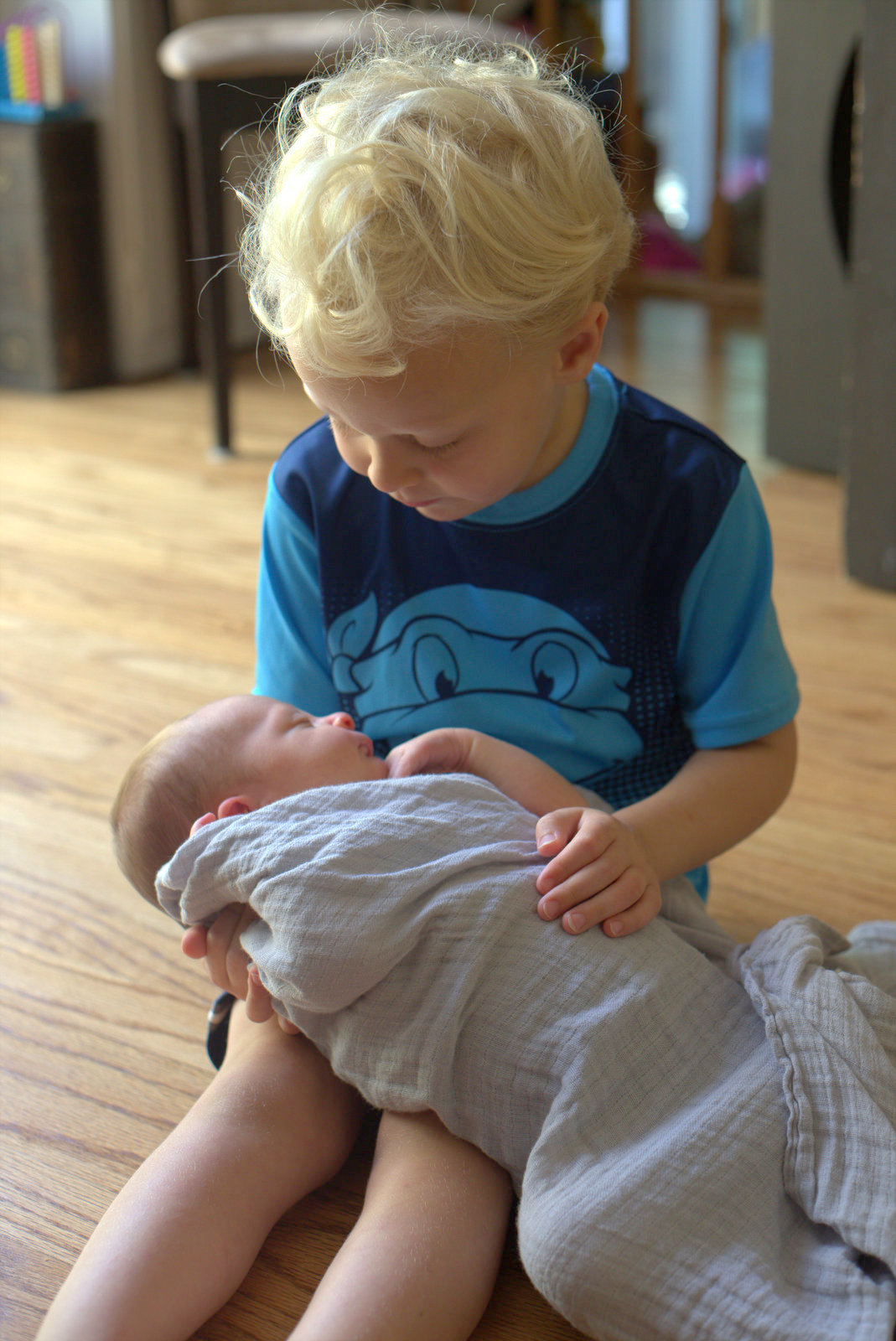 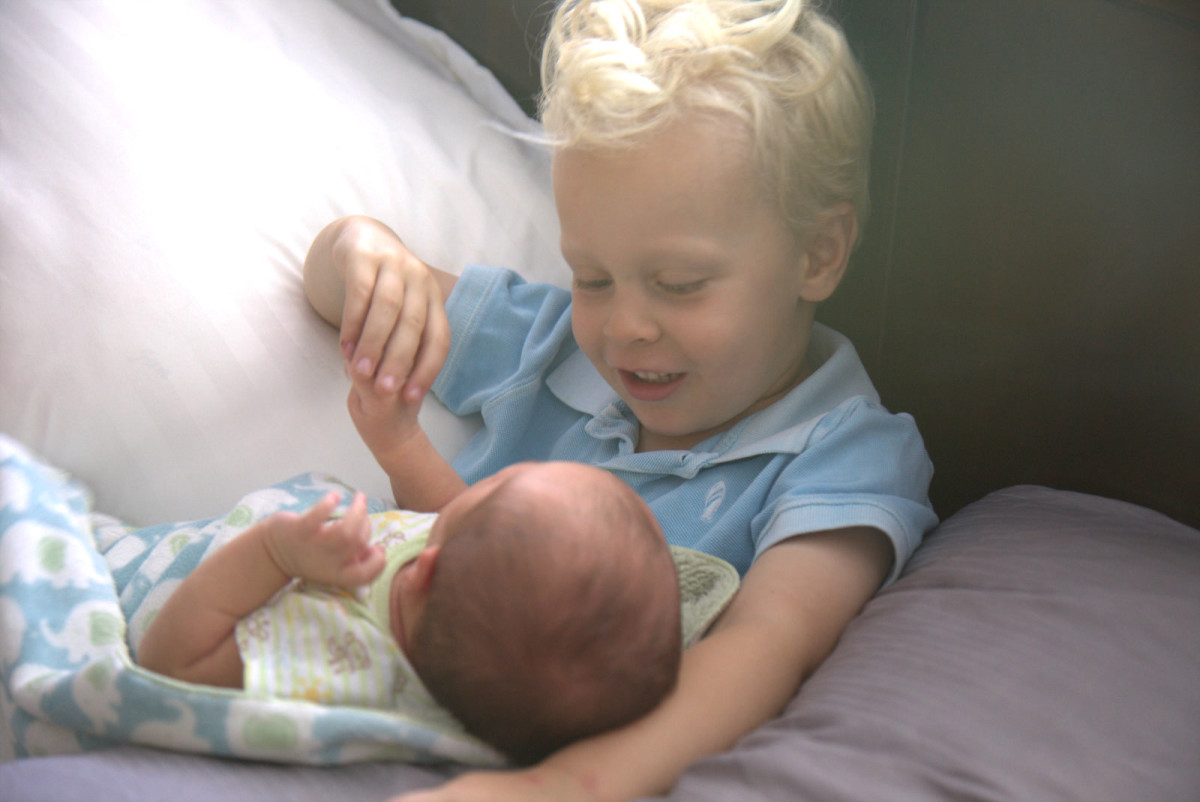 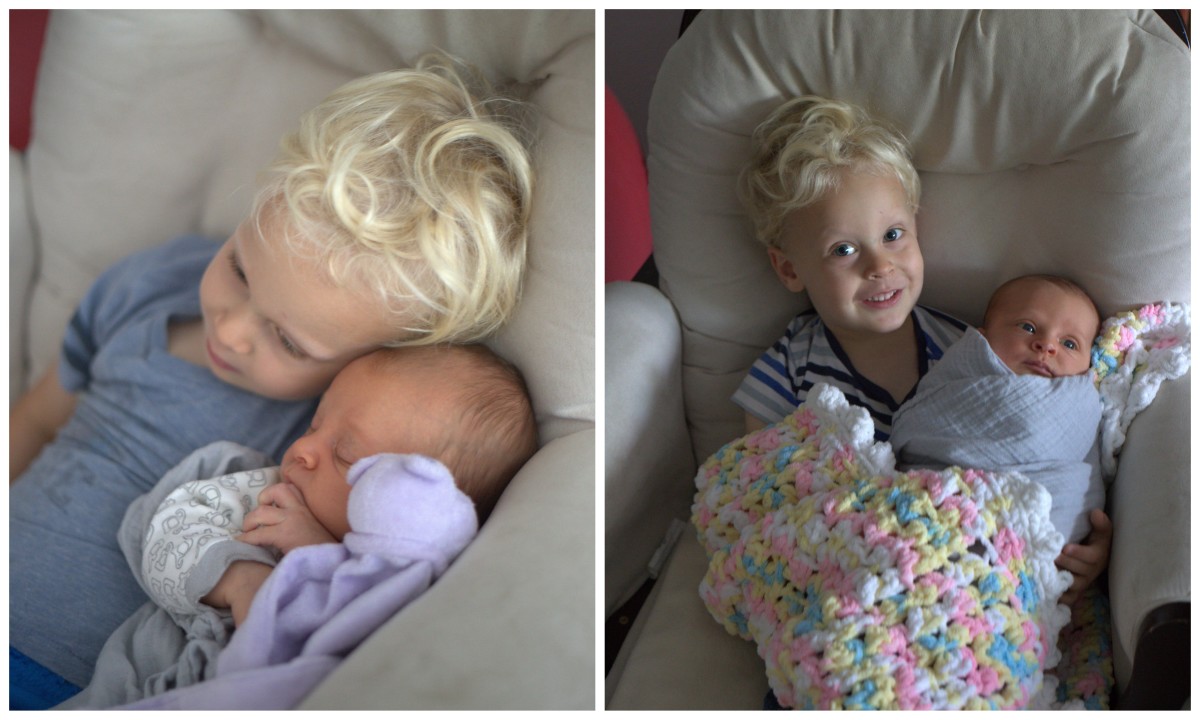 Siblings are such a gift.  I know it’s inevitable there will be times of rivalry and annoyances, but for now I’m savoring watching both Whitney and Dylan as their hearts grow bigger with love for their baby sister.  She’s already so much a part of our family…and aside from a smile here and there, she doesn’t really do much to merit all the affection she gets.  This is the beauty of pure love – the closest I can get to understanding love that is unconditional.