Dylan’s obsession with collecting “treasure” made it easy to do a birthday party theme for him this year….a gold treasure party.  For the first time, we decided to have a small collection of kids WITHOUT their parents!  Of course, I stacked my party team with grandparents, aunties and uncle to help out, but all in all I’m a fan of the party focusing on the kids.  We made it short (1.5 hrs), had snacks instead of a meal, and just focused on doing fun things for them.  Their faces and captivation at each destination convince me that they all had a blast.

I’m pretty proud of how the Treasure hunt turned out – mostly courtesy of our night-before and morning-of inspiration (I recommend marrying someone who operates on the same time schedule as you…both Tyler and I come through in the last-minute clutch).  Here’s what we did…

As kids arrived, they got a pirate hat, a tattoo, and the option of a face paint mustache/beard (which they all rejected!  boo.  I’d play it up more next time because it seemed like such a fun idea).  They colored big pirate pages (yay dollar store) until we were ready to start the hunt.

The Map.  I had drawn a map of all the destinations we invented throughout the yard…but I left the path out and put pieces of dried spaghetti on the table under the taped-down mat such that when rubbed over with a crayon would make the path appear.  In between each destination we came back to the map to see where to go next. 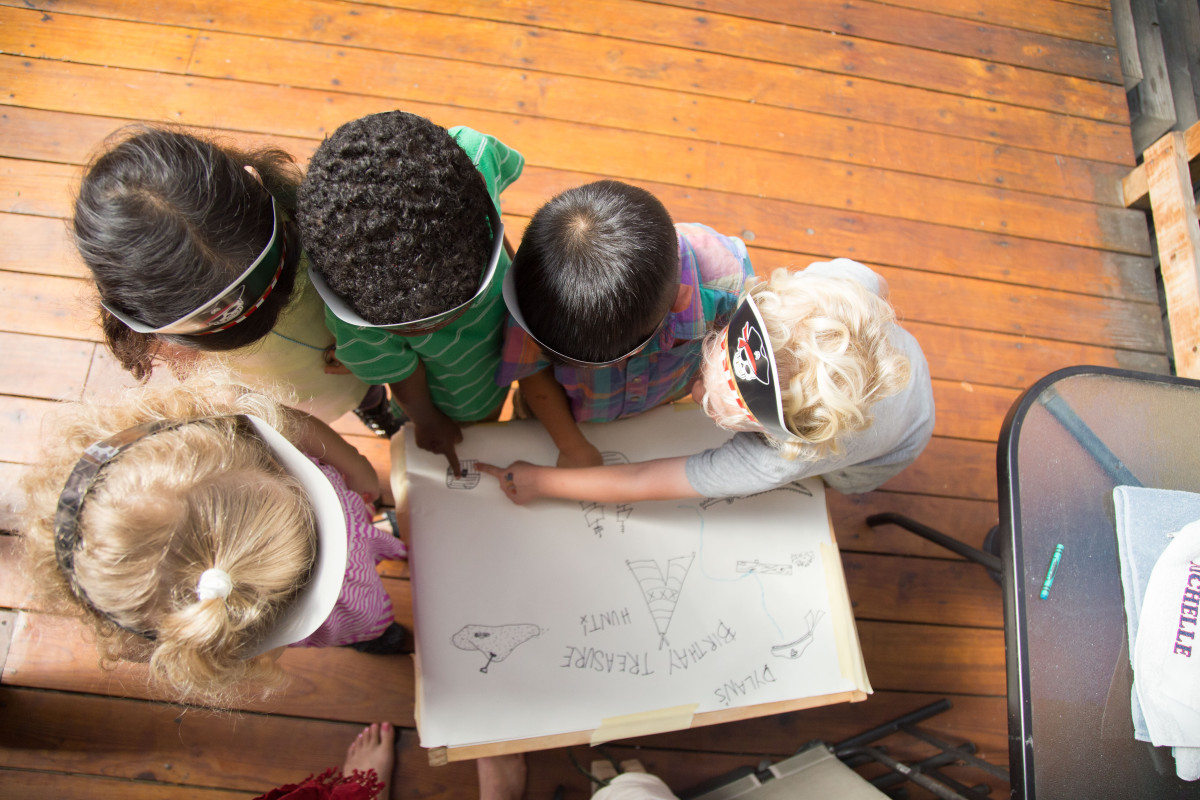 The Treasure.  I loaded up on shiny treasure at the dollar store…fake rubies and “sapphire” blue glass, cheesy trophies (right up Dylan’s alley), fake diamond rings, foil wrapped chocolates (like Rolos) and then I had leftover metallic gold paint that turned rocks and pieces of old broken up cement into beautiful nuggets.  Really, you could transform any piece of junk or throw-away toy into a shiny artifact with this stuff…the possibilities are endless.  We ended up making a second batch of rocks for Dylan to give away to his classmates at school on his actual birthday.  It was instant popularity, I swear.  I overheard kids saying “Where did he FIND these?” one kid even insisted he “lost” his to come up and beg Dylan for a second one.  Gold rocks?  Sure beats staying up all night baking cupcakes.

The first stop was the “Beach” where they dug for buried treasure.  I sewed up some very simple drawstring treasure pouches out of some scrap material, and each bag had a child’s first initial painted in the corner in a pirate font.  They carried around the booty in their little pouches for each stop of the hunt. 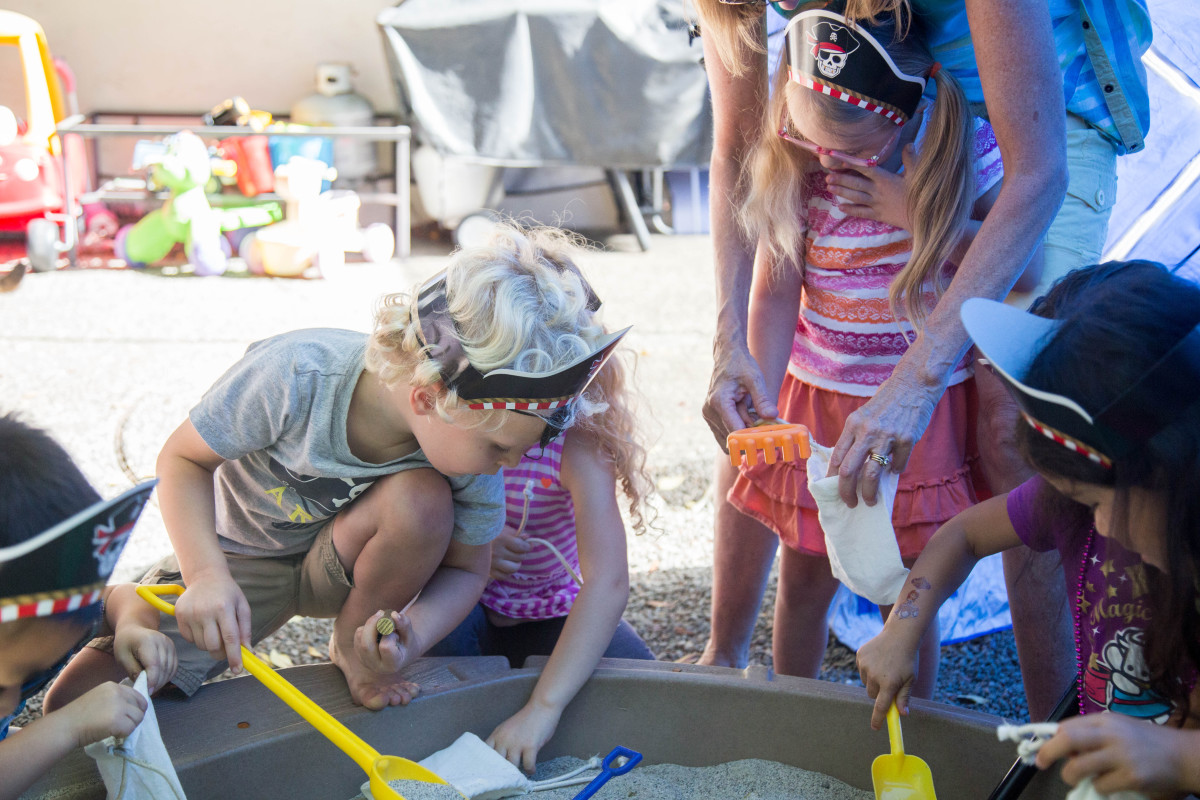 The second station showed the picture of a teepee.  I pulled out the teepee I made last spring (seriously, make one, guys, so cheap, easy and fun).  Tyler emceed the whole thing and did a great job adding drama.  The teepee was across the grass but a CROCODILE was in the way…so obviously the only way to get across was the zipline.  He had trimmed our ivy bush in our last minute desperate yard cleanup fest and hung a big long vine on the zipline which was a really fun touch. 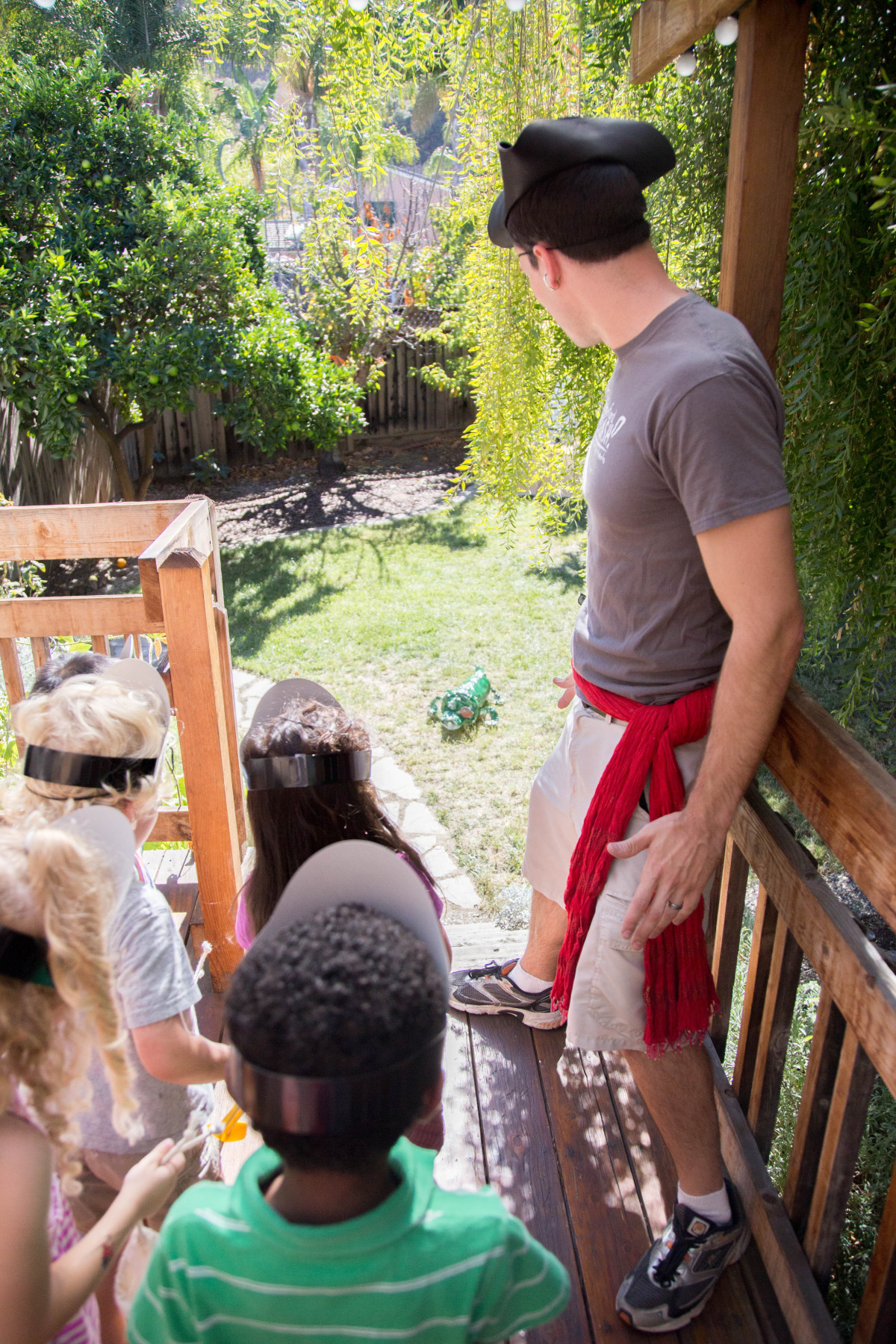 The crocodile was last minute…so consider that when you’re judging…it was thrown together with a deep metal bucket, some egg cartons on the inside (to make it feel like teeth bumps), wrapped in foil with foil appendages, and then spray painted green.  Not an art piece, but with imagination it did the trick for this bunch. 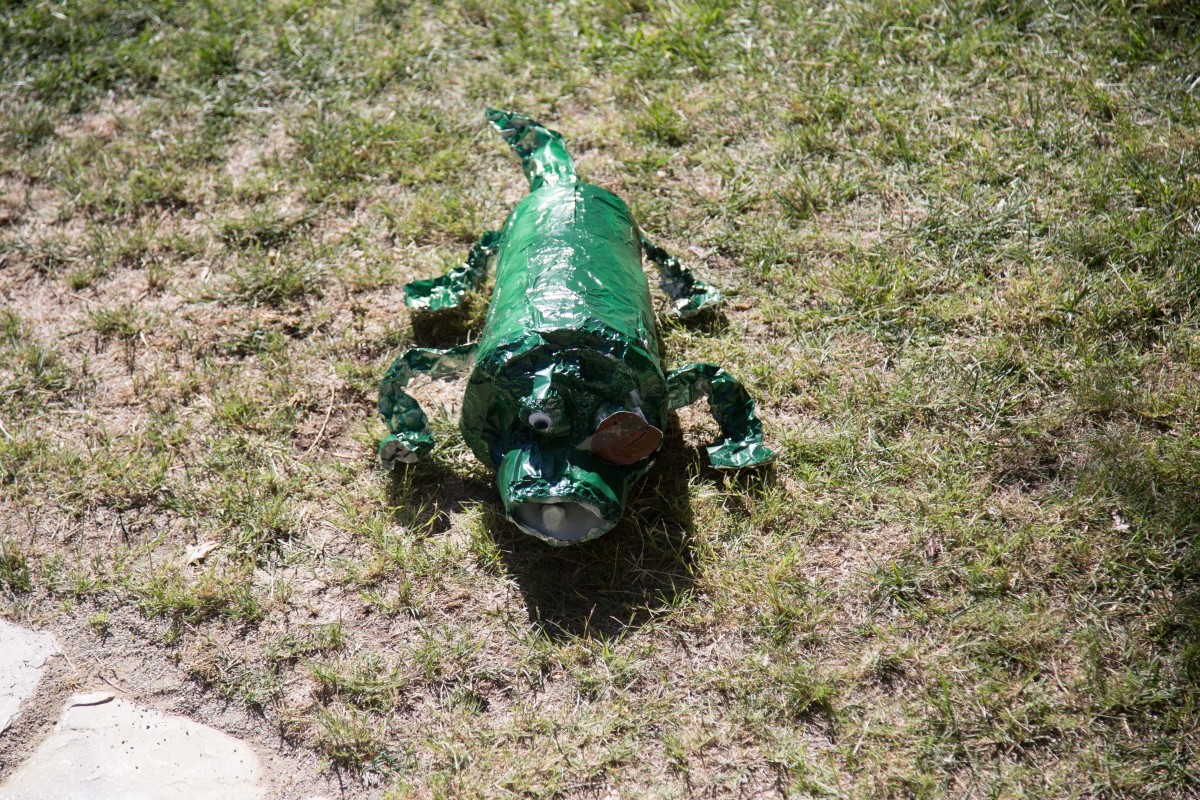 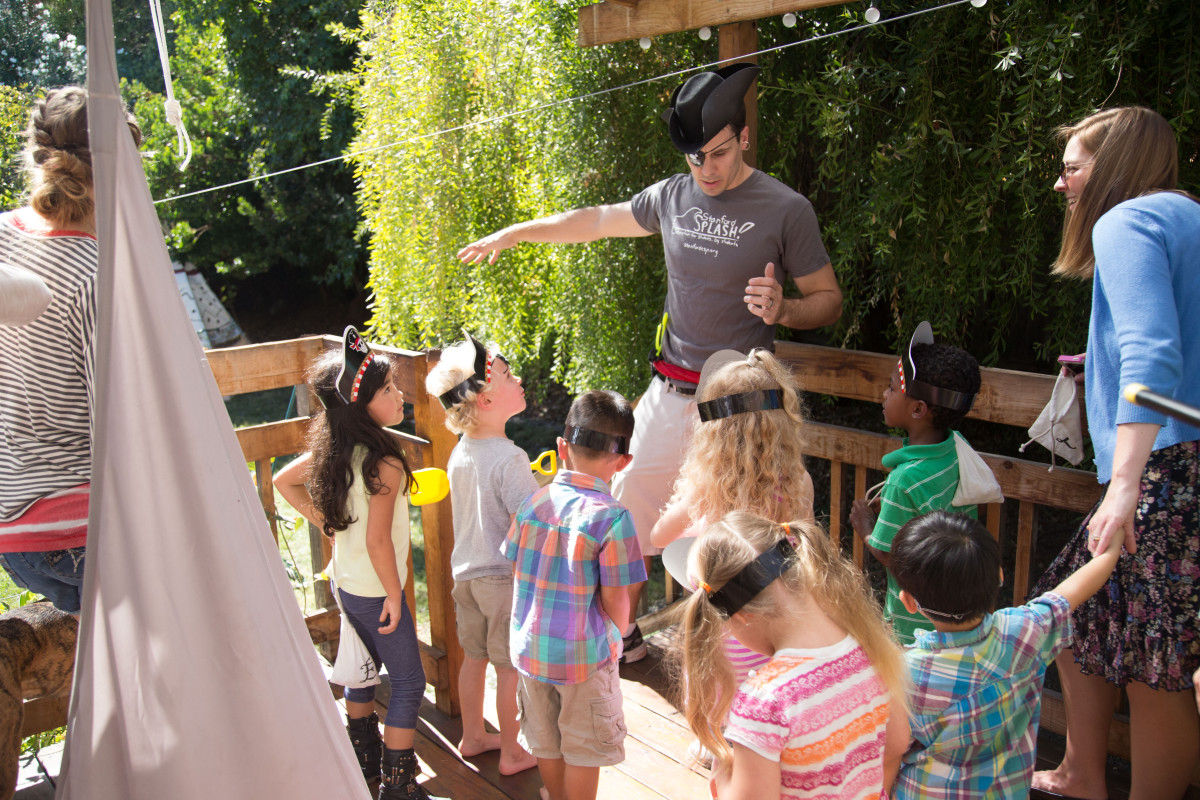 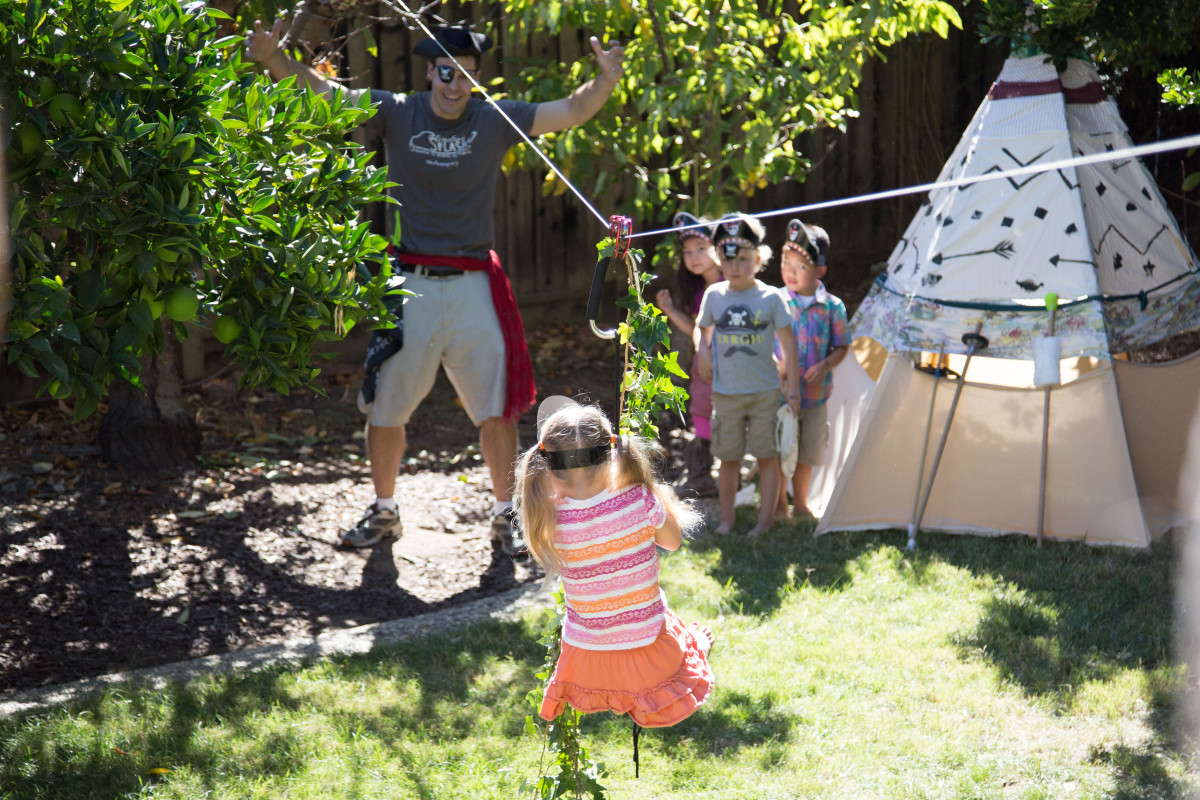 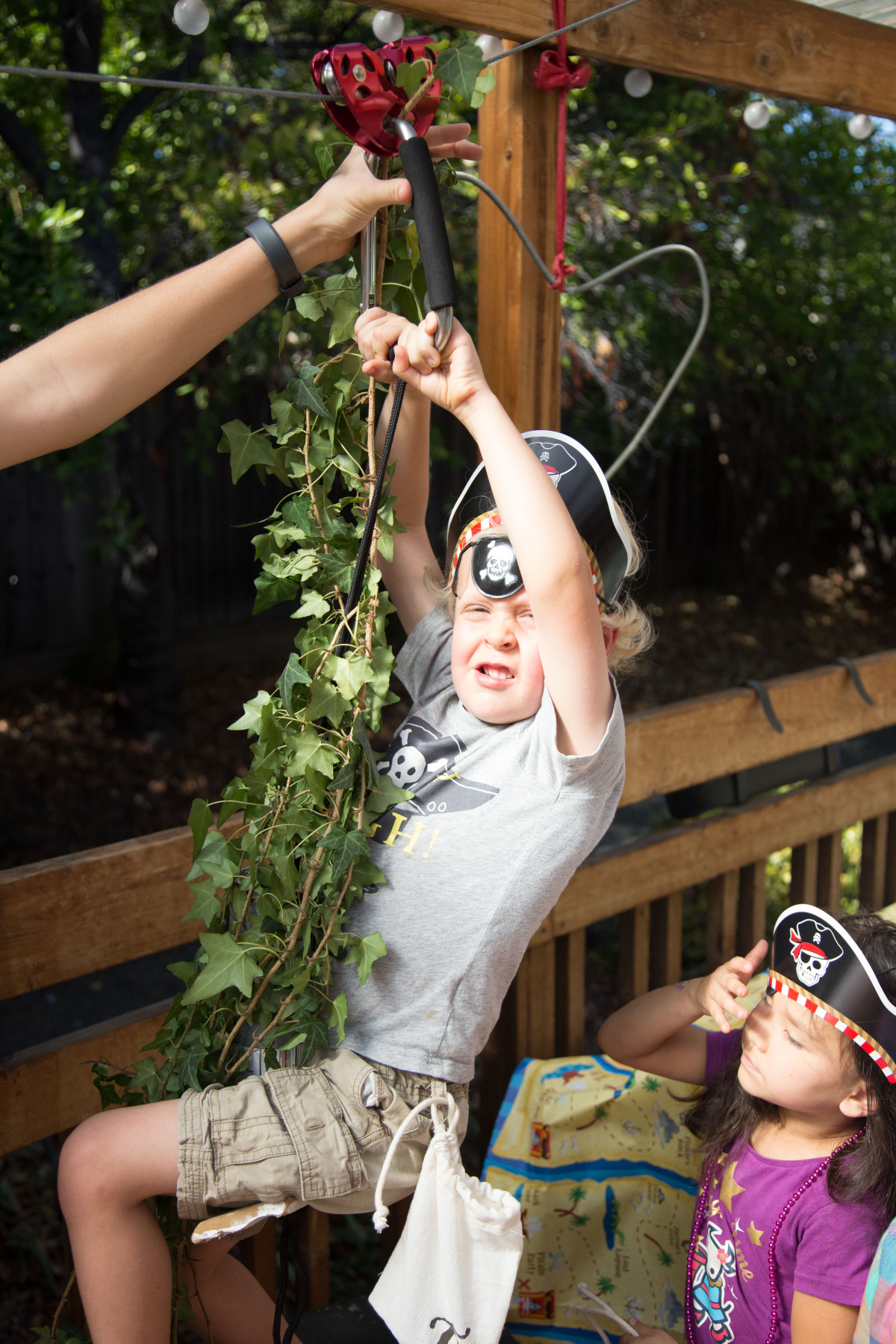 That was Dylan’s pirate face…I made all the kids give me their pirate faces before going…so funny!

At the teepee they each took turns practicing their sword fighting against “Pirate Daddy” (as Dylan called him).  We all counted as each kid made 10 X’s sword-to-sword with Tyler (who did not disappoint with sword fighting stances and theatrics). 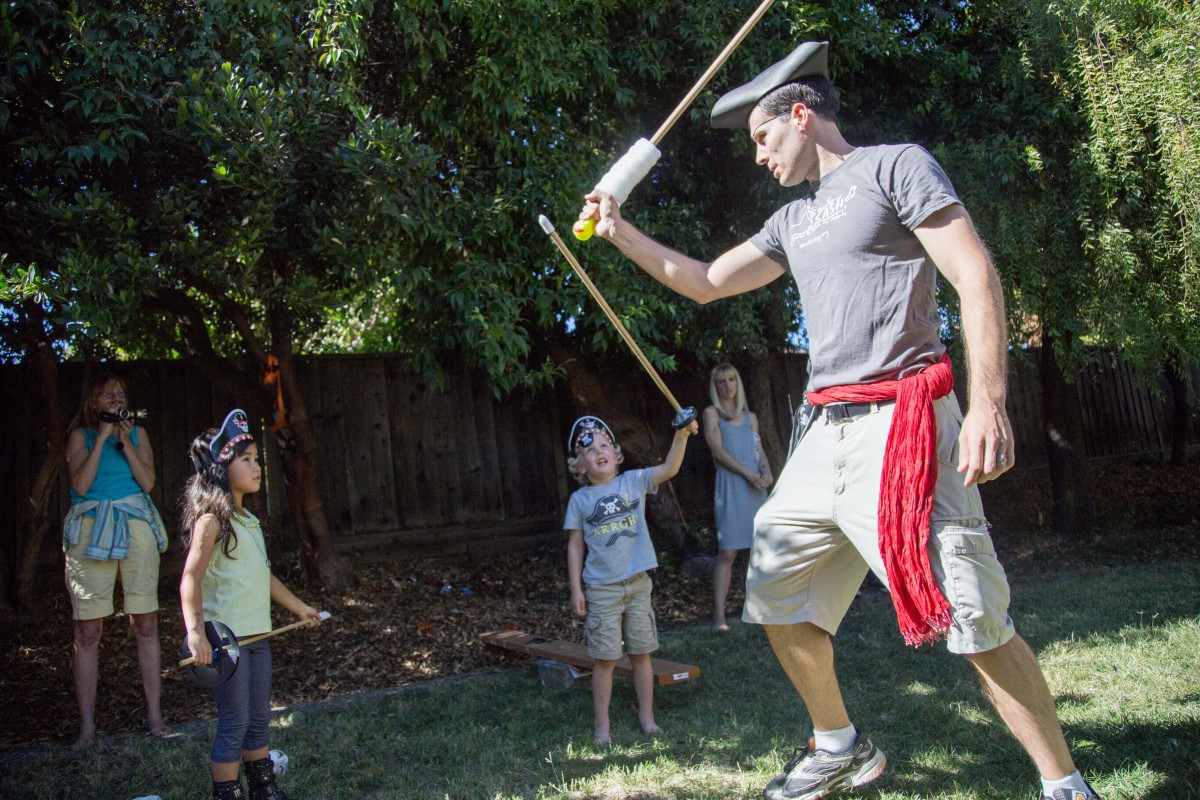 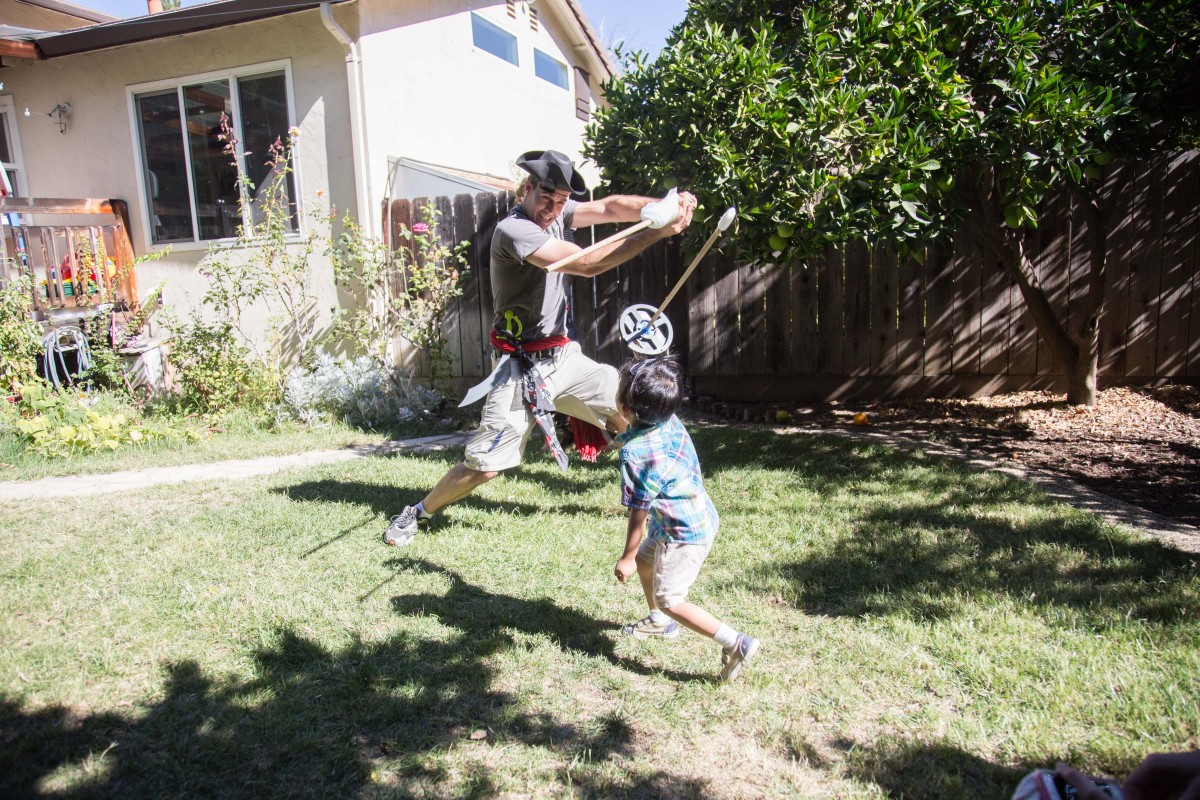 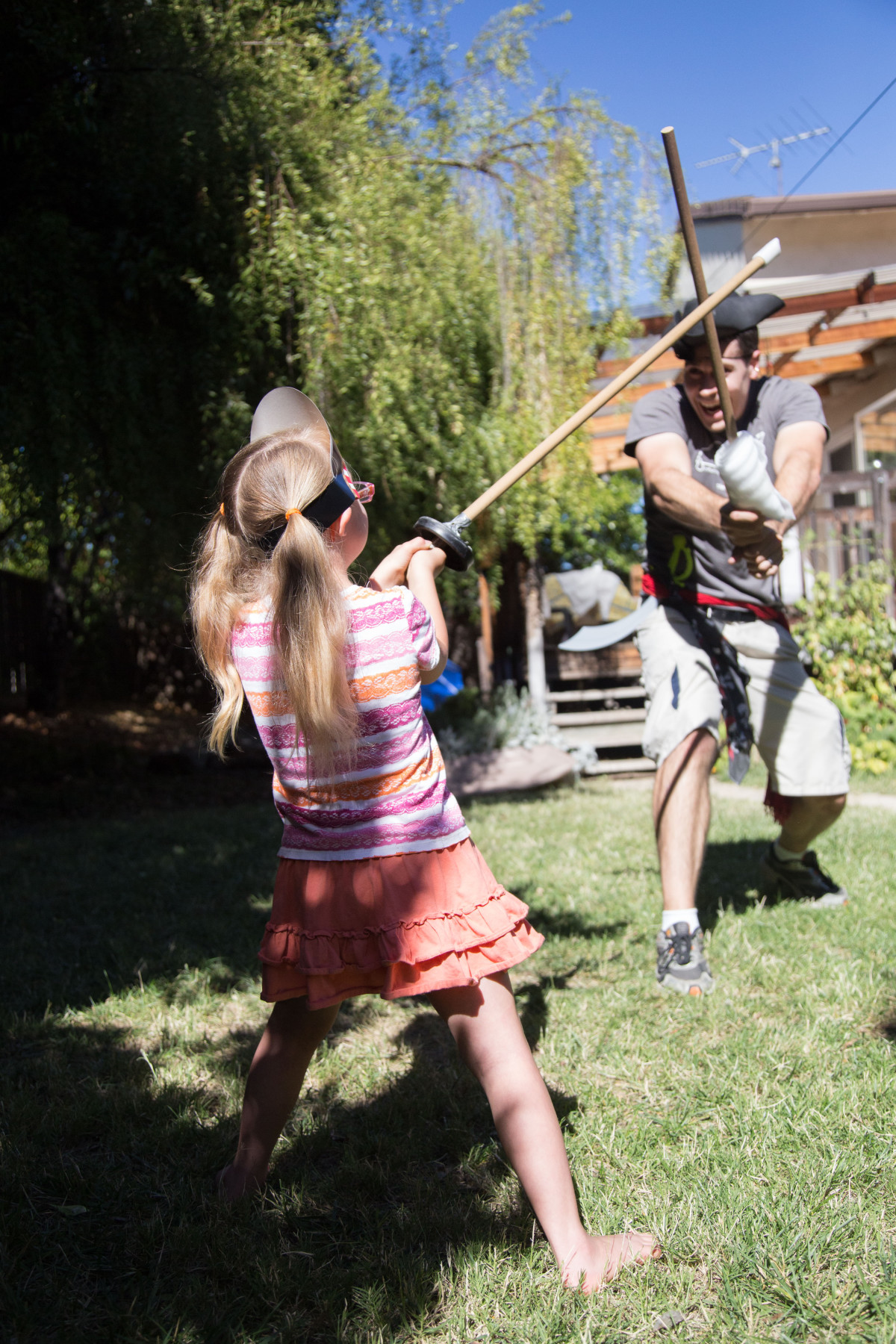 After their sword fighting training they found a trophy treasure in the teepee.

The next stop was to Walk the Plank.  It was a board with a large rock underneath making it like a teeter totter, where Tyler stood on one side anchoring it down and the kids walked and jumped off the other side into a pile of leaves to retrieve a ring pop. 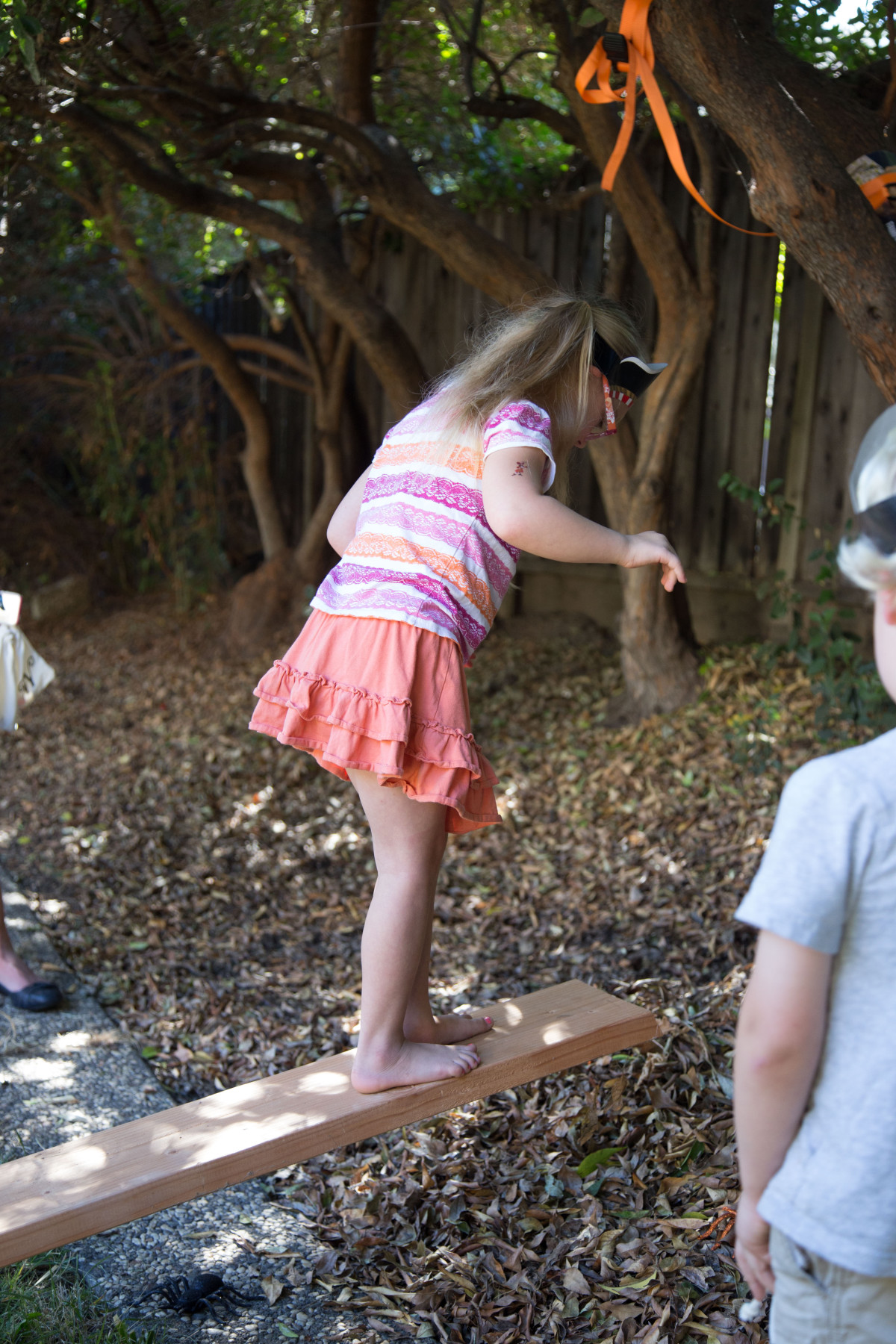 Next they faced the crocodile again.  It was filled with shaving cream and the fake diamond rings…they had to reach in its mouth to get their ring. 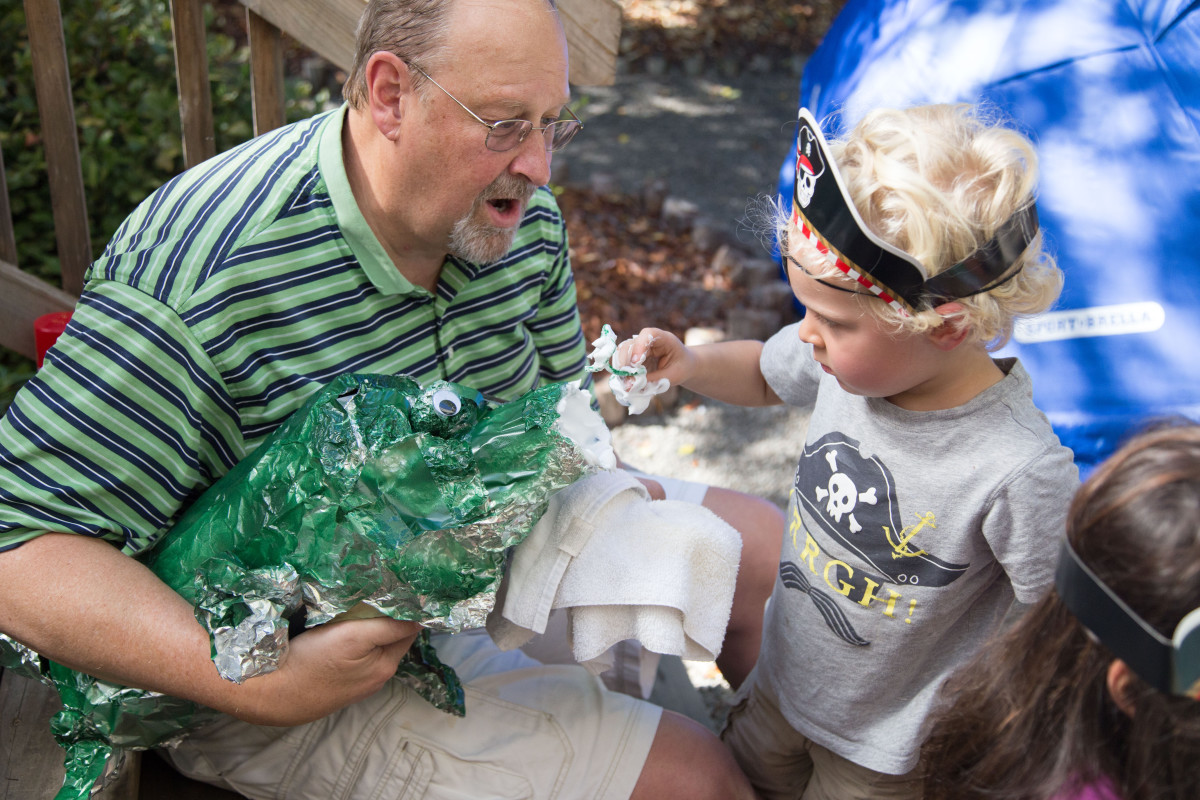 The last task was to weather some stormy seas on the Pirate Ship.  We had made a “family hammock” out of a large piece of canvas and boards and we let two of the “crew” climb up and ride it as Tyler tipped it back and forth…they were rolling around and laughing, it was a lot more fun that I anticipated. 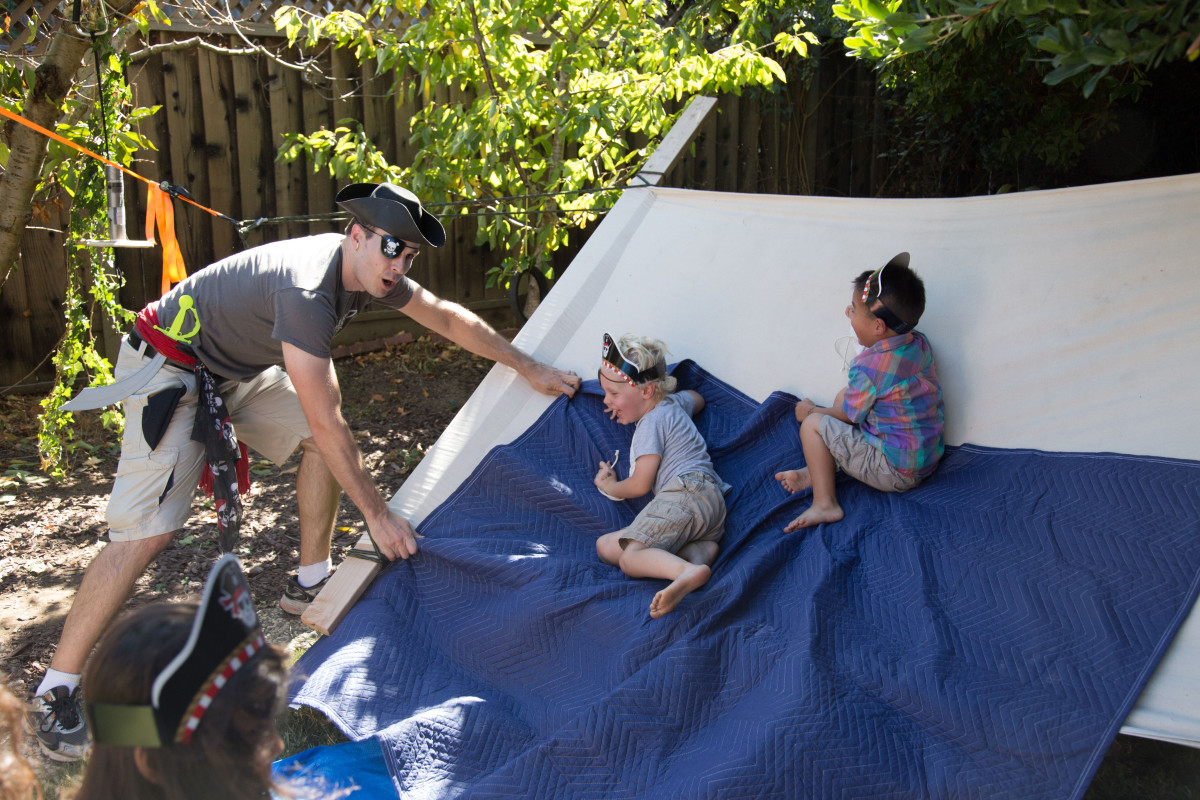 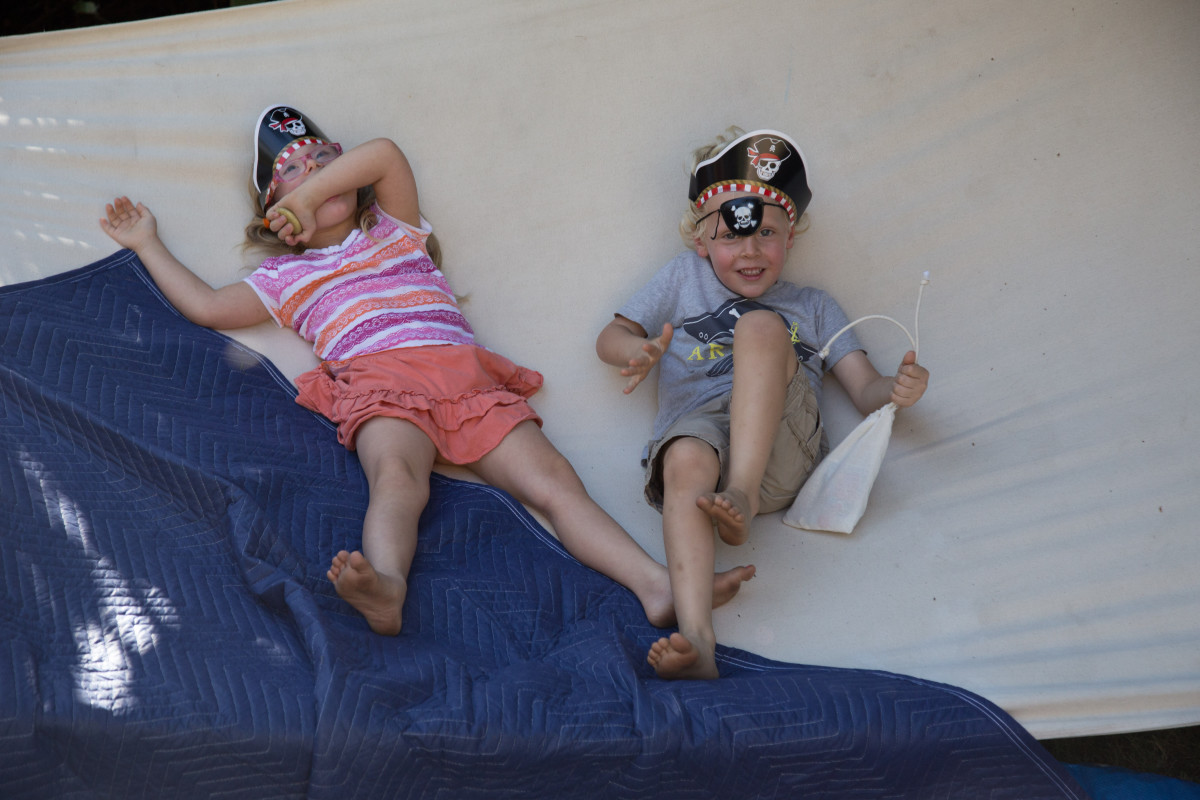 Here’s a closeup of the treasure bags… 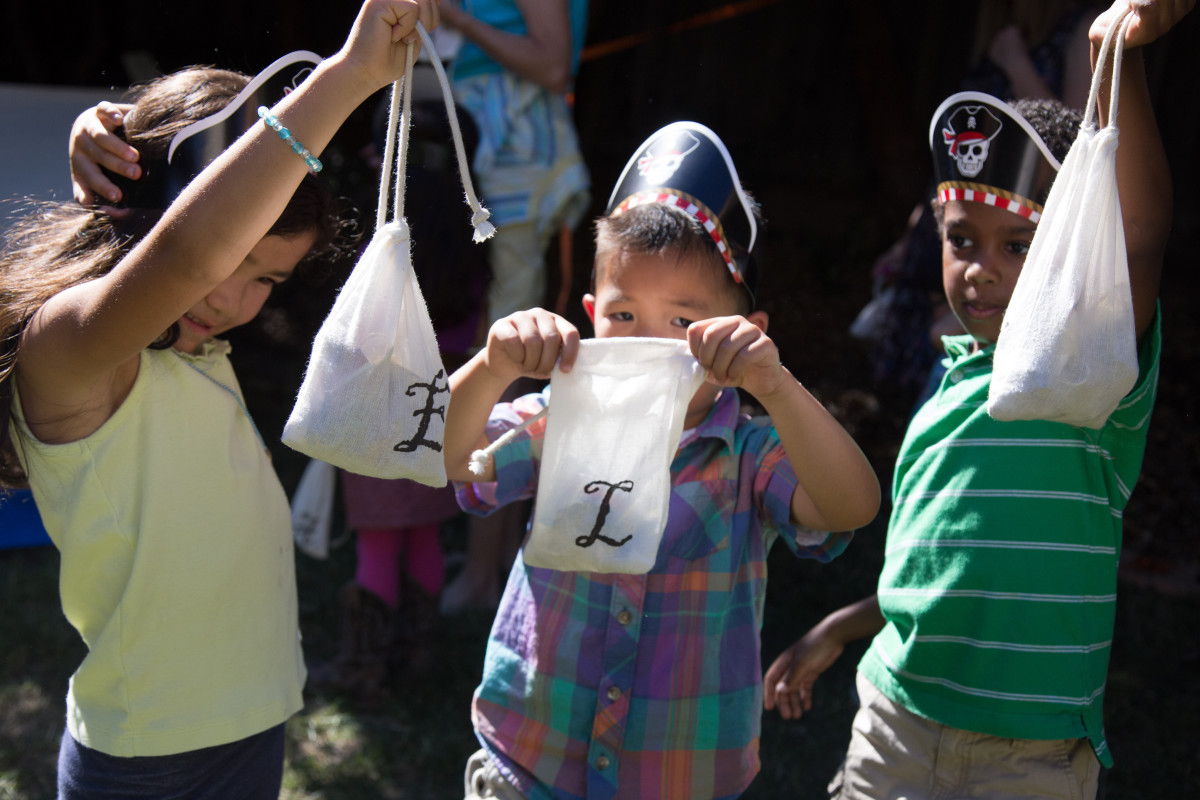 Finally they went in to the treasure room with a gold-foil table cloth on the table and candy lined up and everything shiny in the house I could find on the table.  They ate some of Dylan’s favorite snacks and had (treasure map painted) cake and ice cream.  Good times had by all!  Yo ho! 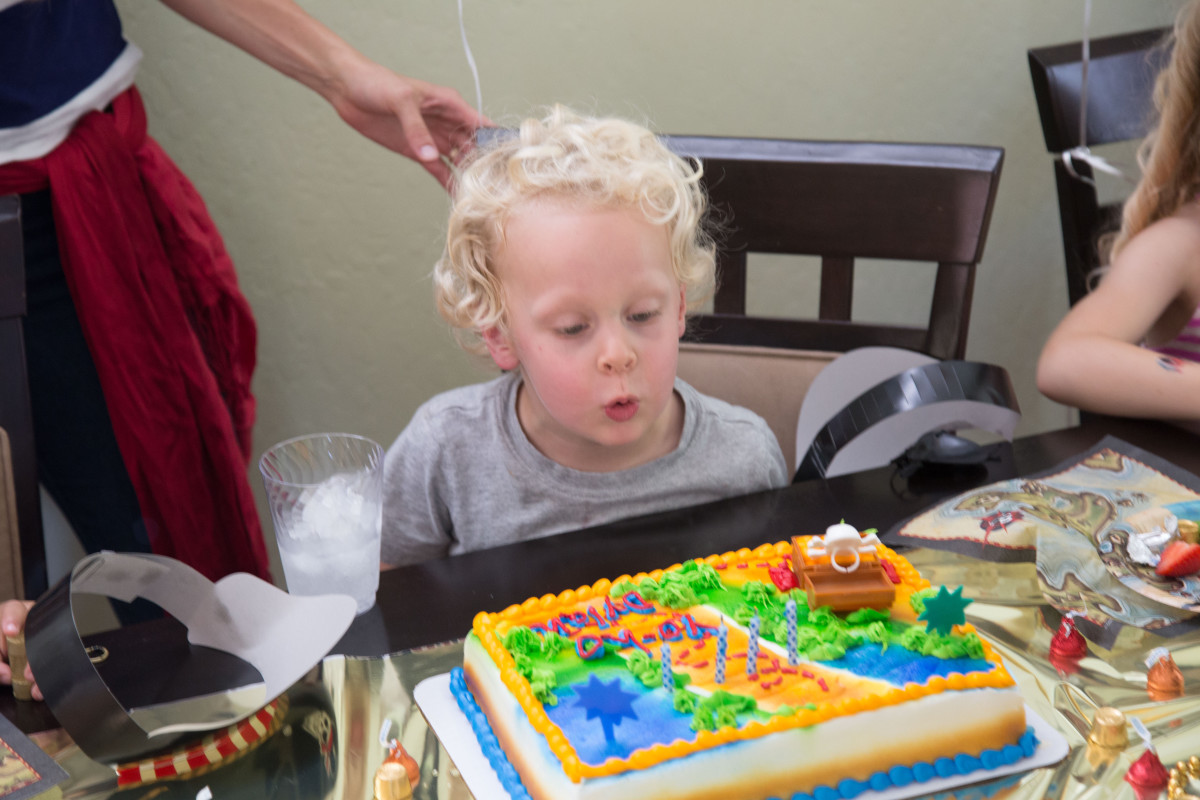 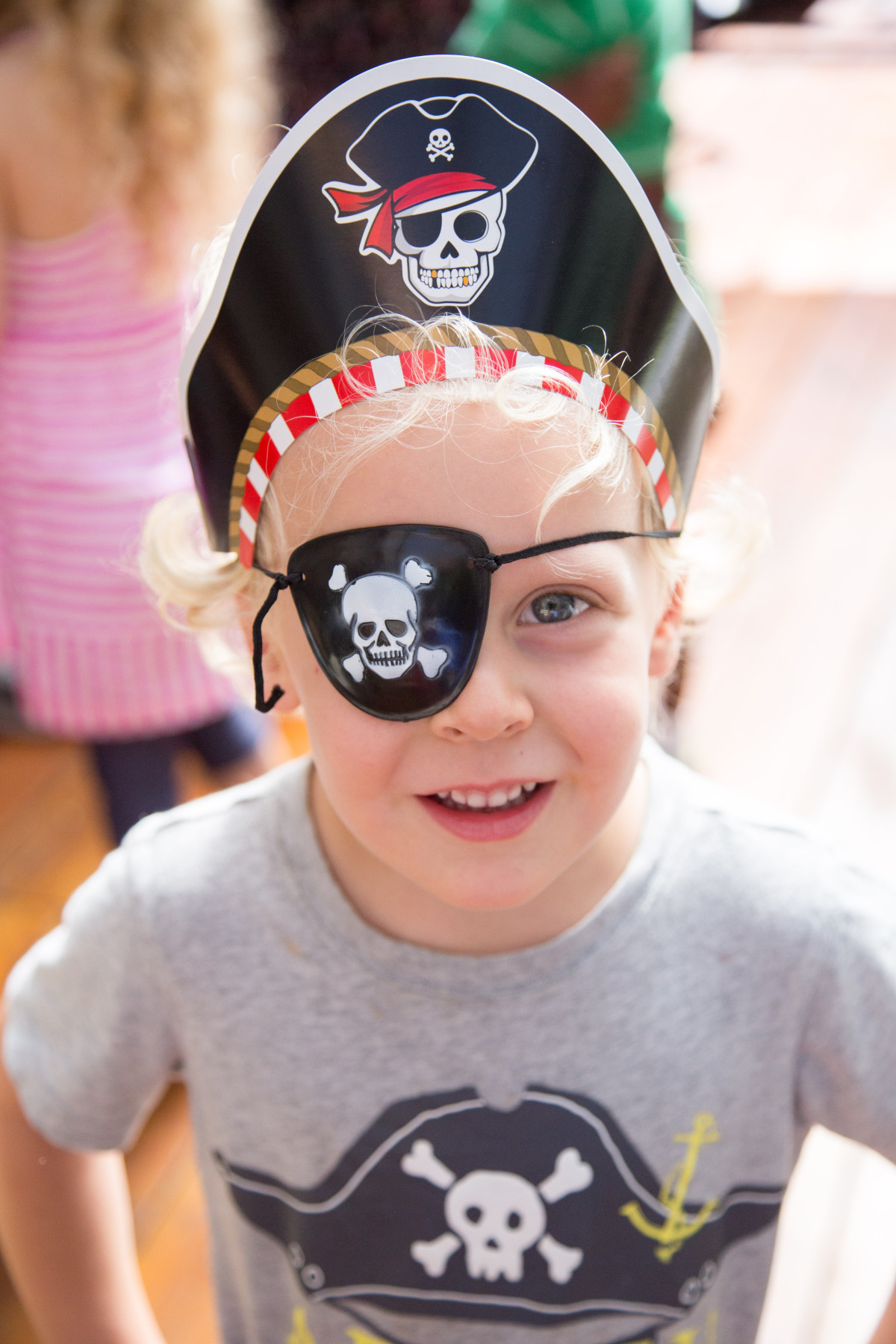