A few weeks ago, my little garden helper was thrilled to “help” me plant some flats.  Whitney helped a little, too, but was a little more interested in the hammock than the miracle of seed growing. 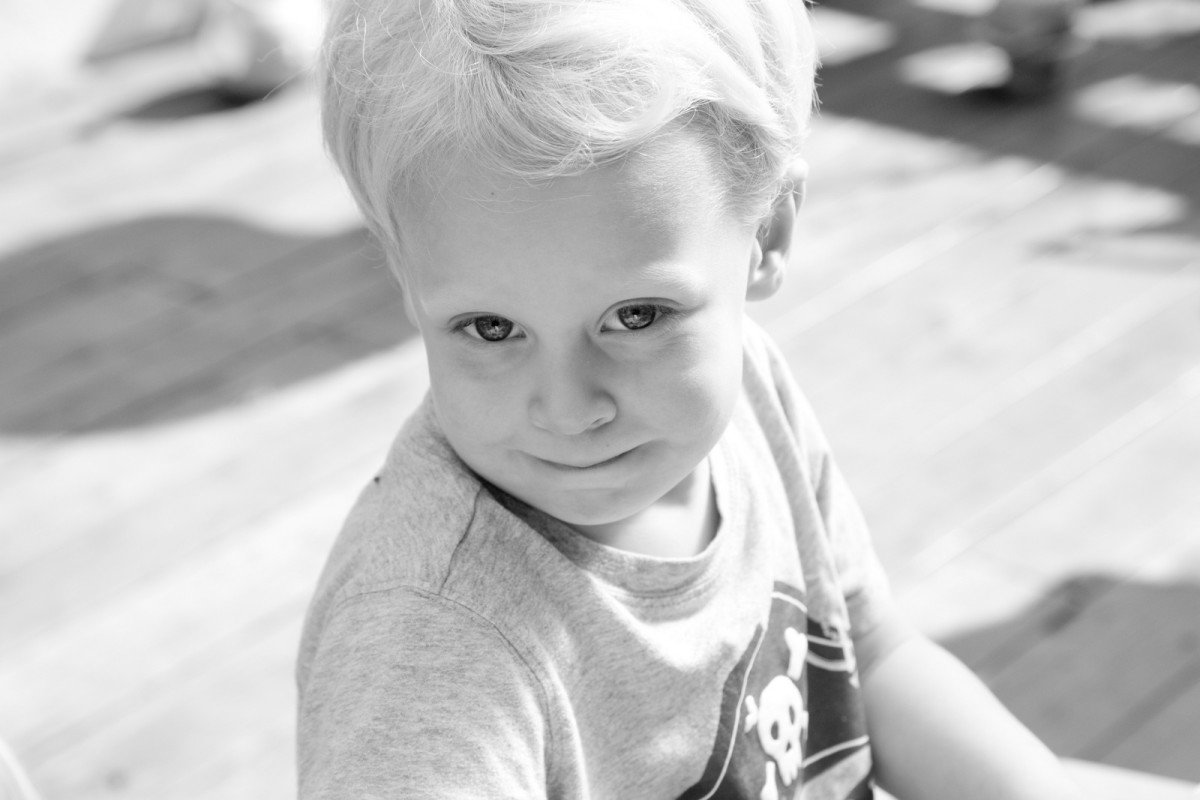 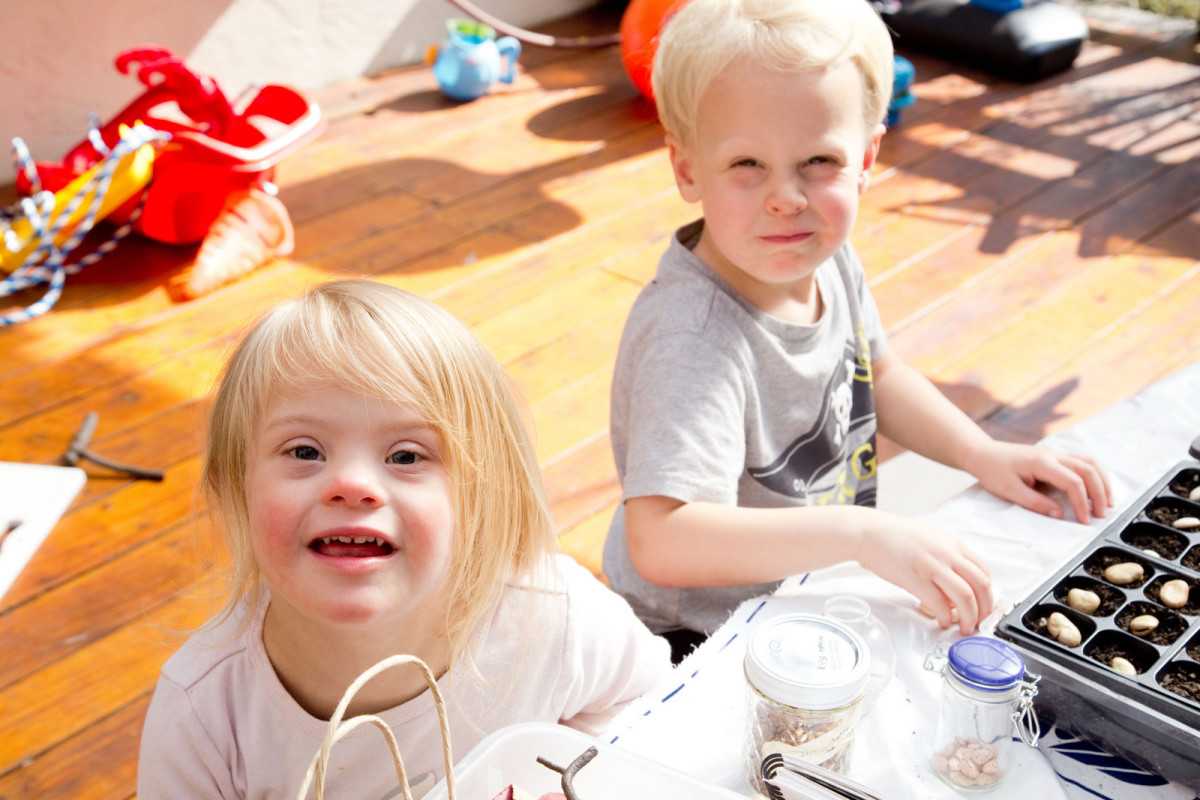 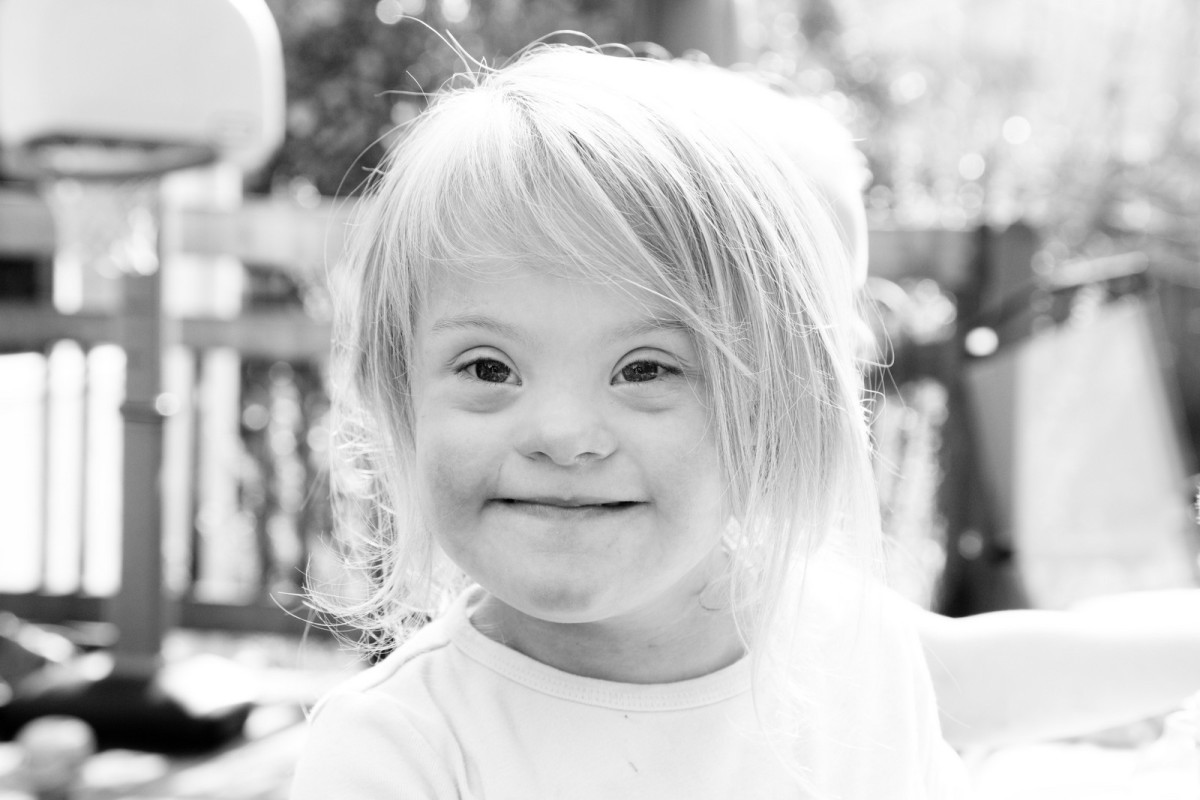 I have a collection of seeds…some of them getting old now.  It’s hard for me to handle seed packs made to plant a whole farm of something you only need a few plants of.  I can’t seem to discard the seeds, sometimes they’ll last a few years – but I resent not getting to buy fresh new ones.  Last year I bought from Seeds Now and among other things (they are organic, non GMO, etc.) I was thrilled I could buy interesting varieties at .99 – partly cheaper because they had more reasonable amounts of seeds – for instance maybe only 20 zucchini seeds (really, you’re only going to want 1-2 healthy plants each year), rather than 100.

I also have seeds (particularly bean-varieties and sunflowers) that I have saved from last year…Dylan is all over planting these, he remembers when we shelled them for saving.  It’s great, because beans are particularly easy and fast to grow.  I let him plant what he wanted in a few sections of our flat. 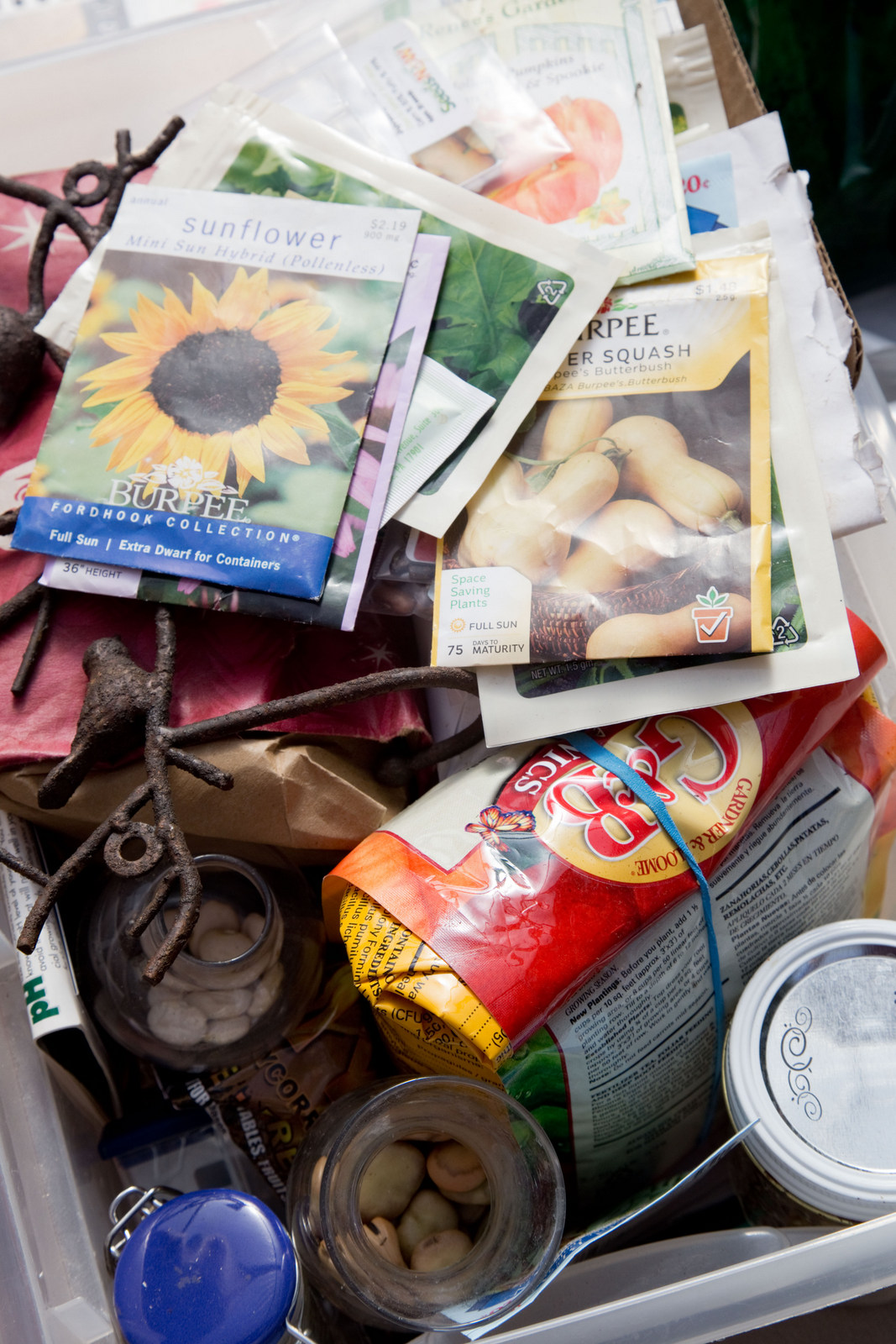 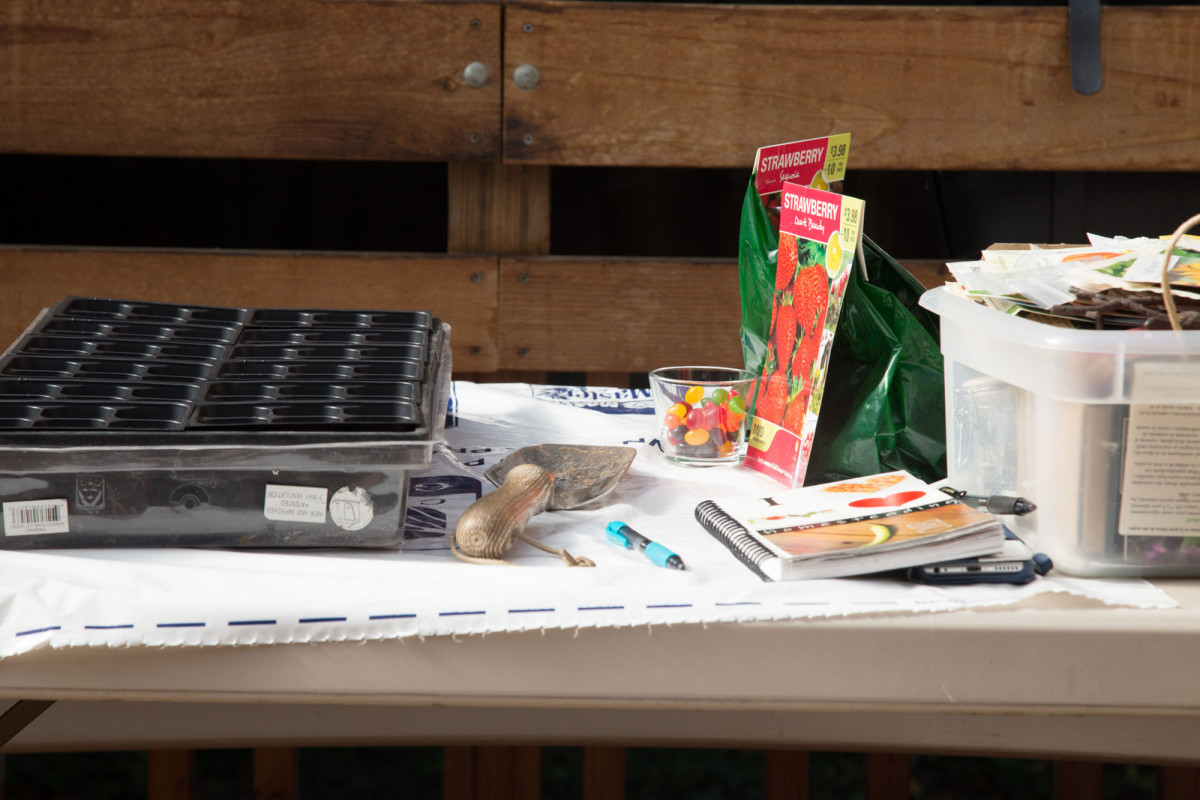 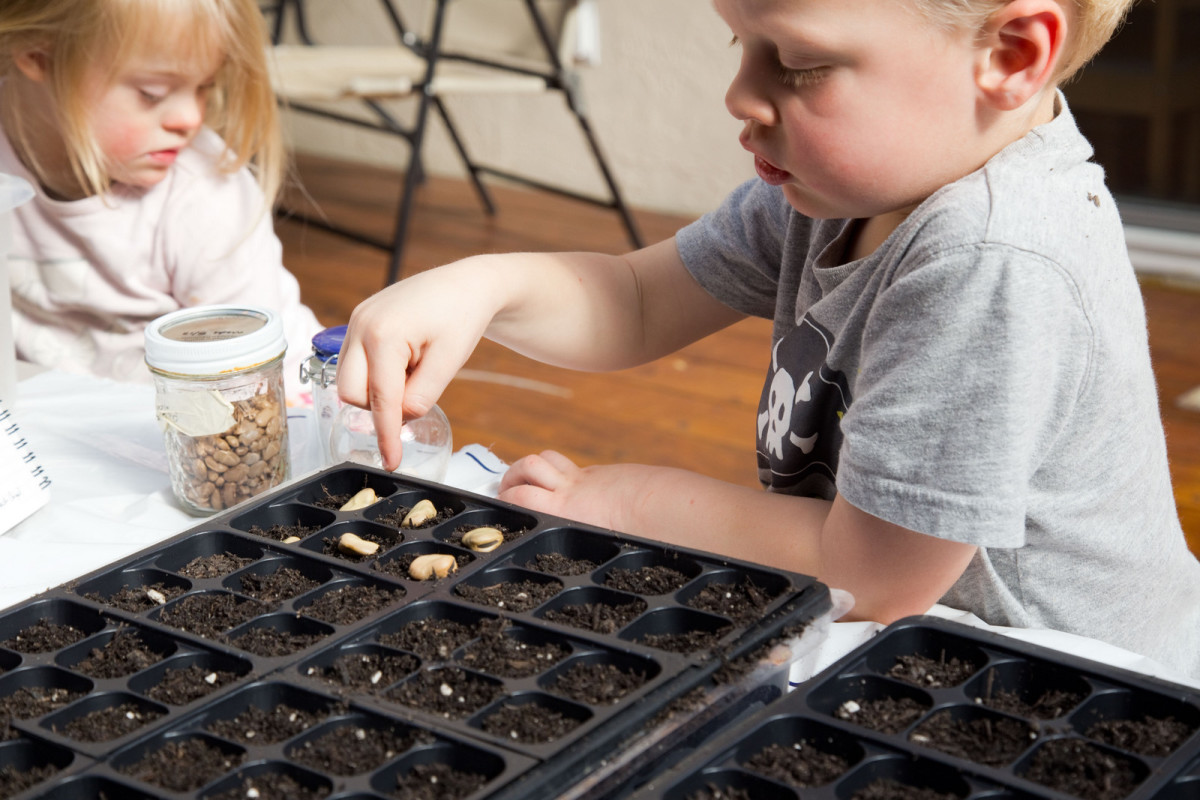 Last year I took a class on gardening at Love Apple Farms – – love that place, I’ve also taken a cheese making class there, I highly recommend treating yourself to any of their classes. I copied my flat-planting lesson from that class for this year’s spring garden.  First, you fill all but the last 1/4 inch of a flat full of really good clean potting soil (they were all about Gardner & Bloome brand products and soil).  Lay the seeds on top.  Label the quadrants (I also make notes in my gardening journal – yes, I’m proud to geek out like that, as if I’m a scientist or something). 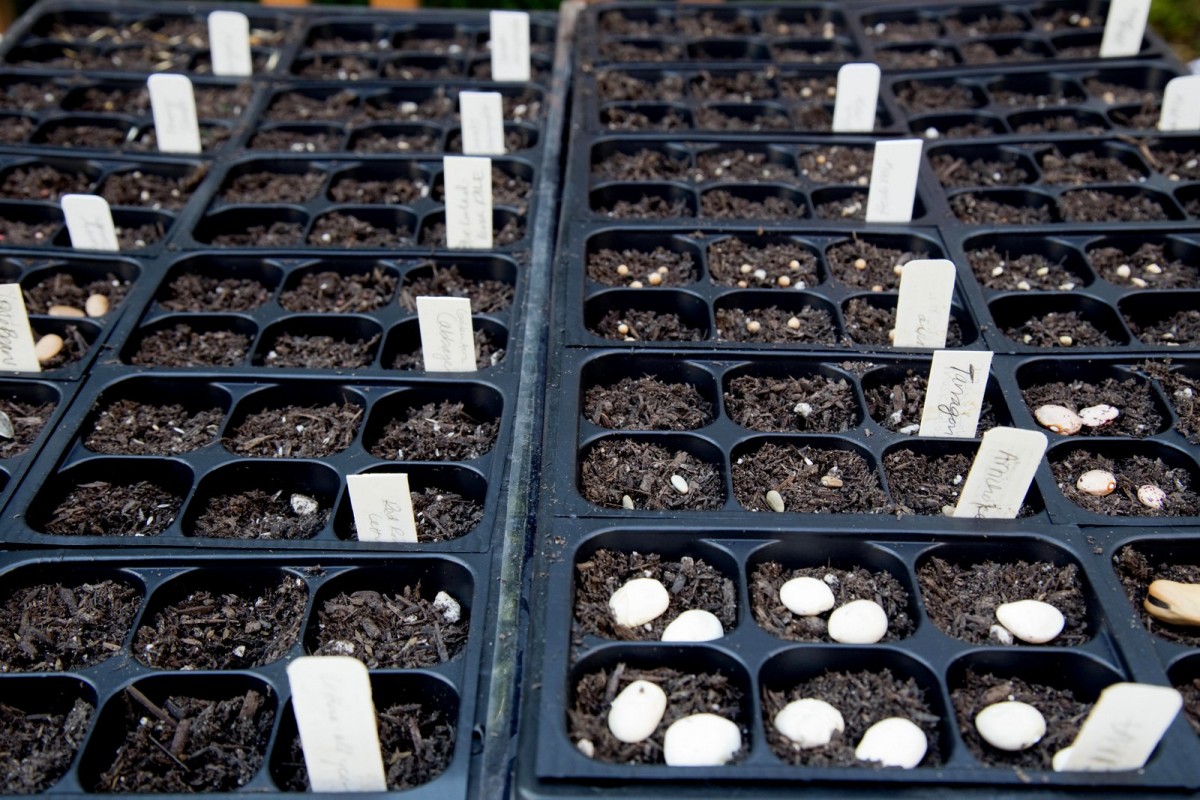 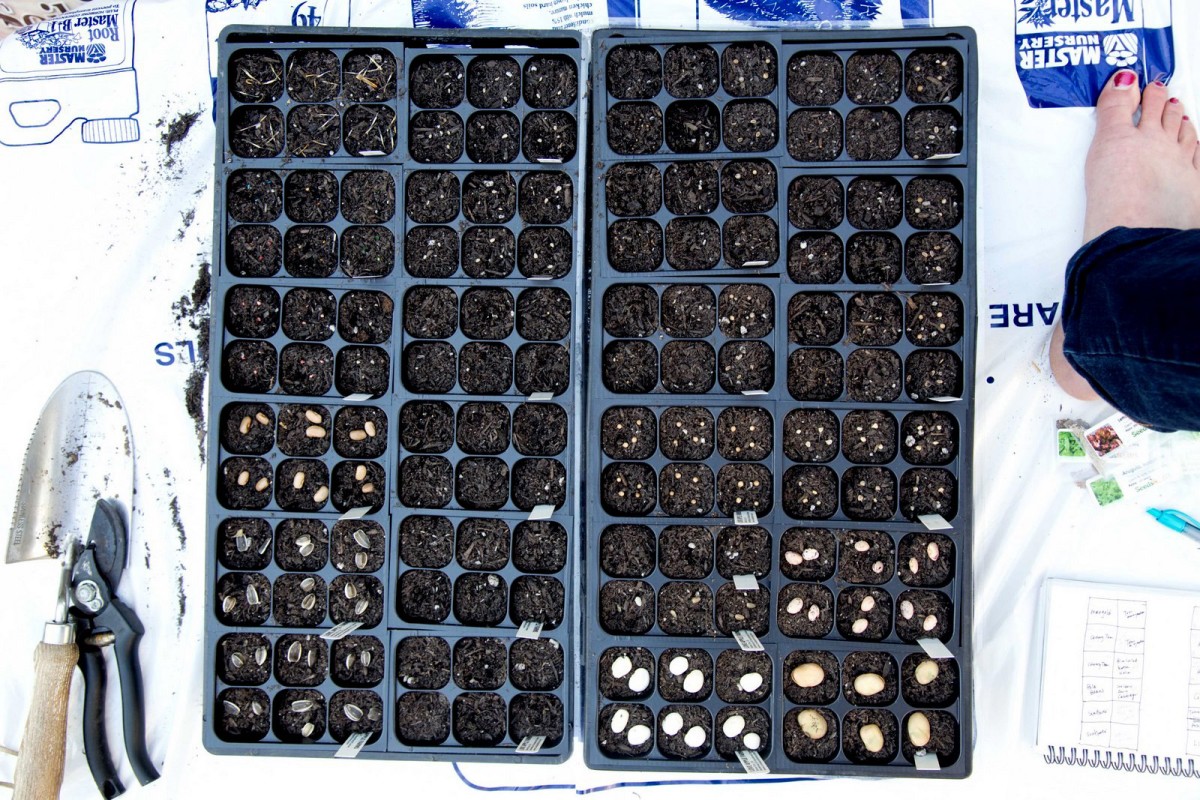 When all the cells are full (most with multiple seeds), fill that last 1/4 inch with soil and water 3 times (waiting about 5 minutes between watering) – so as to be thorough but also not create flash floods that sweep the light and airy soil away along with your seeds. 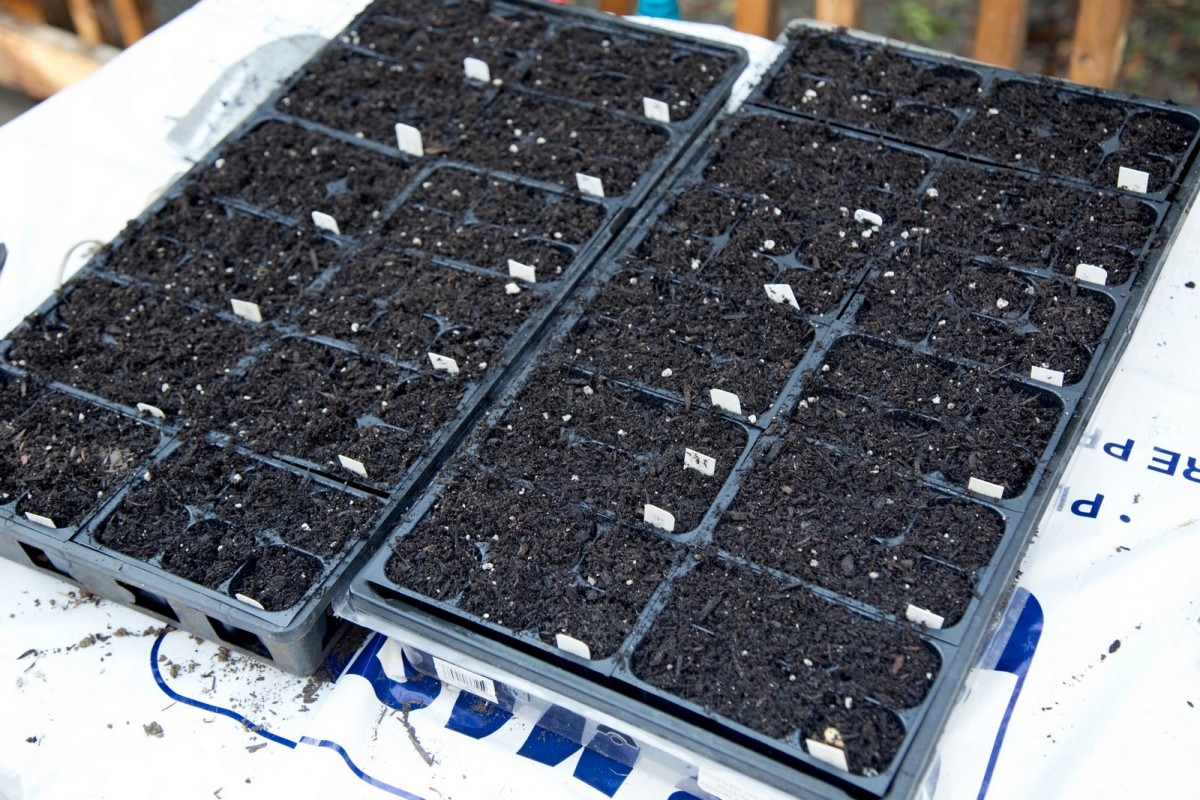 Cover the trays with plastic to lock in moisture until the first seeds sprout (a few days) – place in a warm spot.  I put one tray on a heat mat (I only have one) and the other on top of the fridge. 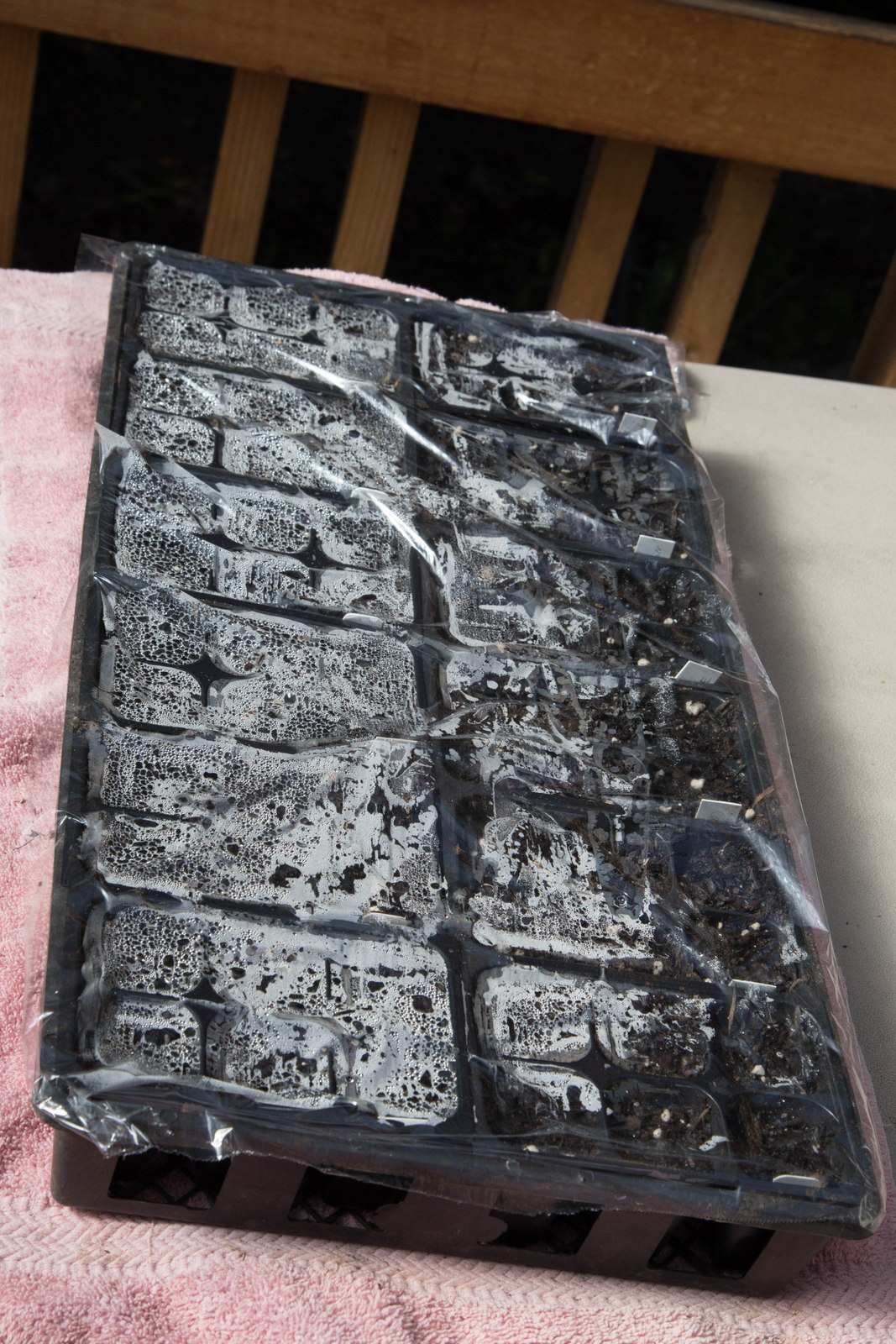 Little sprouties a few days later…always fun to see the seeds waking up.

Once the seed babies start sprouting they still need warmth and moisture but also need sunlight!  I’ve used my kitchen window and rigged up a light shining down on them in the past, but this year the weather has been so nice I’ve just been taking them outside to spend the days with the real sun.

Here they are about 2 weeks later…almost everything is sprouted and thriving (and the beans are already overgrown…need to find places to plant them!) 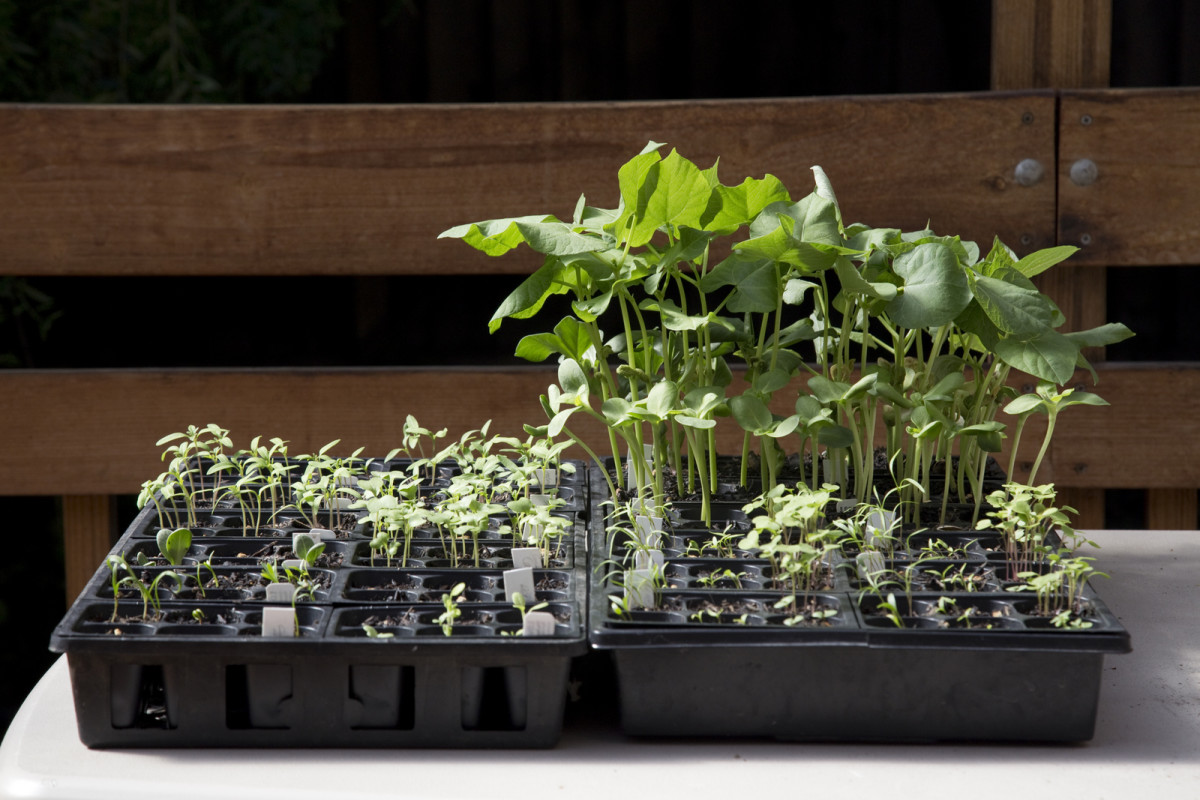 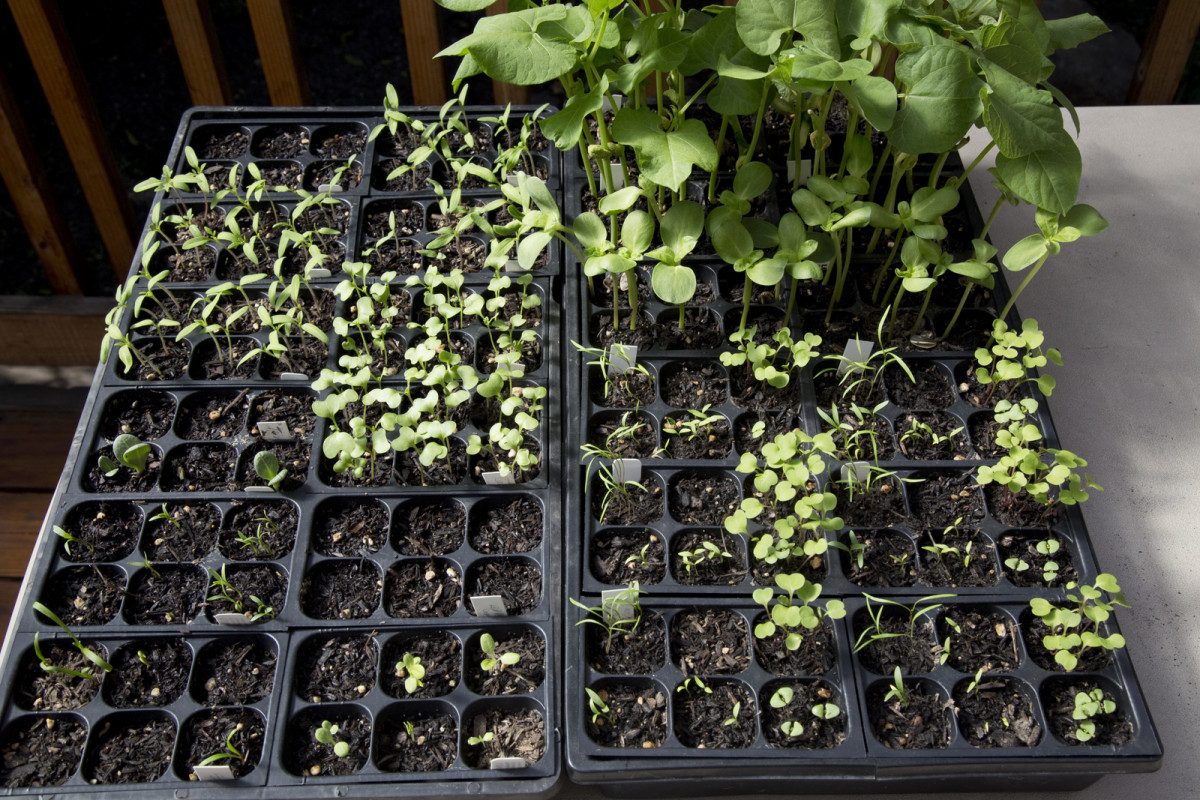 Now to get the garden beds ready….I have some rebuilding to do since the wood of my current beds is rotting and the roots of the orange trees have found their way into that good soil.

If you’re thinking of starting seeds DO IT!  You have plenty of time to sow for the late spring/summer…and if you’re local and have extras let’s trade!