After much anticipation (and years of jumping on the bed), Whitney has finally reached the JUMP milestone.  Yay!

For those of you who might not have the opportunity to witness the many little steps that make up something like jumping (since most often a kid hits a certain point and you say “jump” and he just does it, right?)  here’s what it looked like for Whitney:

She’s been wanting to jump all the time the past few weeks – on the trampoline at her class at the YMCA, in bouncey-houses, off the ledge of the pool.  This girl has worked hard for this step!

During a walk just the two of us yesterday I was inspired more than usual to make some teachable moments…we were talking about everything we saw.  I was pointing out shapes and colors, and we were describing the fluffy kitties and talking about going fast and slow on the scooter.  We sang songs (we are always singing songs).  We used the curb as a balance beam to practice putting one foot in front of the other, and we jumped from the curb (holding my hands) over and over and over.  Walks are often with both kids and times when I’m rushing home to make dinner or start the bath.  I’m usually constantly trying to get the kids to walk straighter and faster (instead of wandering in people’s yards and stopping to touch everything).  It was refreshing to slow down and realize how helpful this type of walk can be for Whitney. 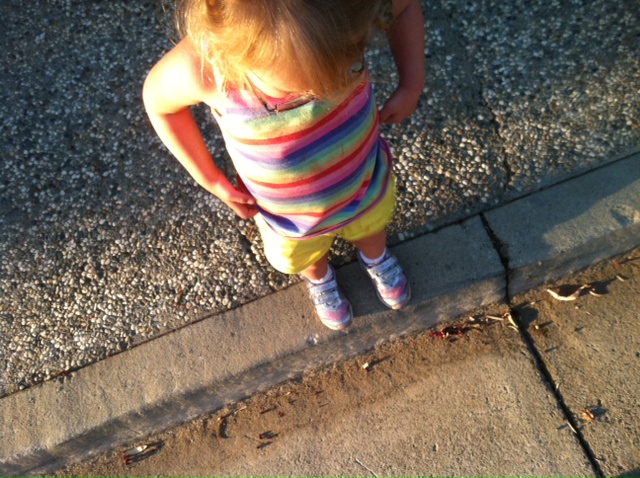 Oh, and while she’s jumping, he’s hitting baseball milestones.  He could do this for hours…we need one of those pitching machines!

We’ve already hit a homer over the fence into the neighbor’s yard.