Whitney’s Alphabet Party was my first Pinterest-inspired party…I scoured people’s boards to come up with ideas for all sorts of things….a fraction of which came to fruition or worked out as initially intended. All in all the party was great fun and I enjoyed all the projects that made the theme come alive. And I learned a bit in the process. For instance, make sure you mention your theme in the invite…nothing like someone asking “what are these hanging letters? Do they spell something?”

THE FOOD:
It was a brunch party. We had three egg casseroles: Strata (Egg and Cheese), Skiers French Toast, and a Hash Brown Casserole. They all were delicious and are super easy to make, fairly cheap, and since they sit in the oven baking for roughly 45 minutes it’s one thing I’m not scrambling to take care of last minute.  We also had ingredients for Yogurt Parfait: Yogurt, Berries, Granola, melon, and ABC cereal.  To round it out we had doughnut holes and three types of “bread” – Almond Poppy Seed, Carrot, and Banana.  I had intended to label all the food with a Letter “Y is for Yogurt Parfait” but ran out of time and only ended up labeling the casseroles and the Yogurt… 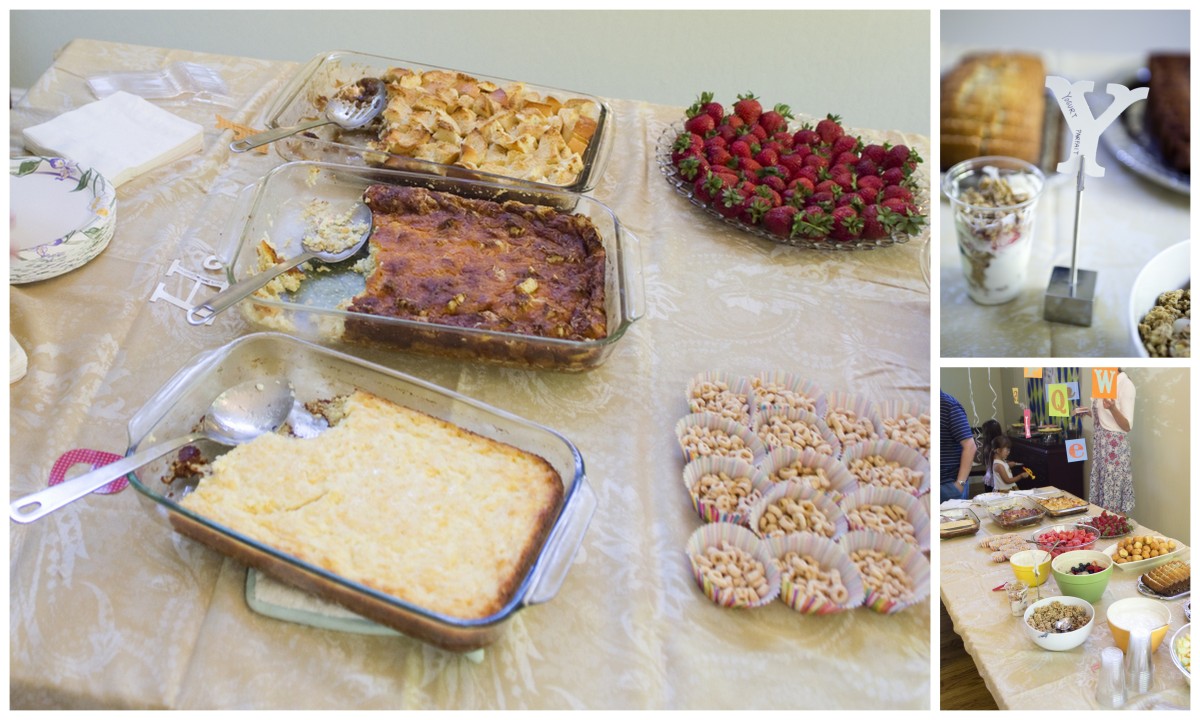 You can see above the letters hanging from our chandelier.  I found a discounted pack of paper with punch-out letters at JoAnn’s Fabric and Crafts.  My mom helped glue them on to scraps of paper and we hung with fishing wire at differing lengths.

THE GOODIES: I posted earlier about the ABC crayons I made, and each kid got a baggy of crayons along with a “bean bag” of their initial.  I had a blast making these letters out of felt.  They were relatively easy to make, the materials were cheap (I filled them with rice), and something about getting on the sewing machine was very therapeutic for me. 🙂 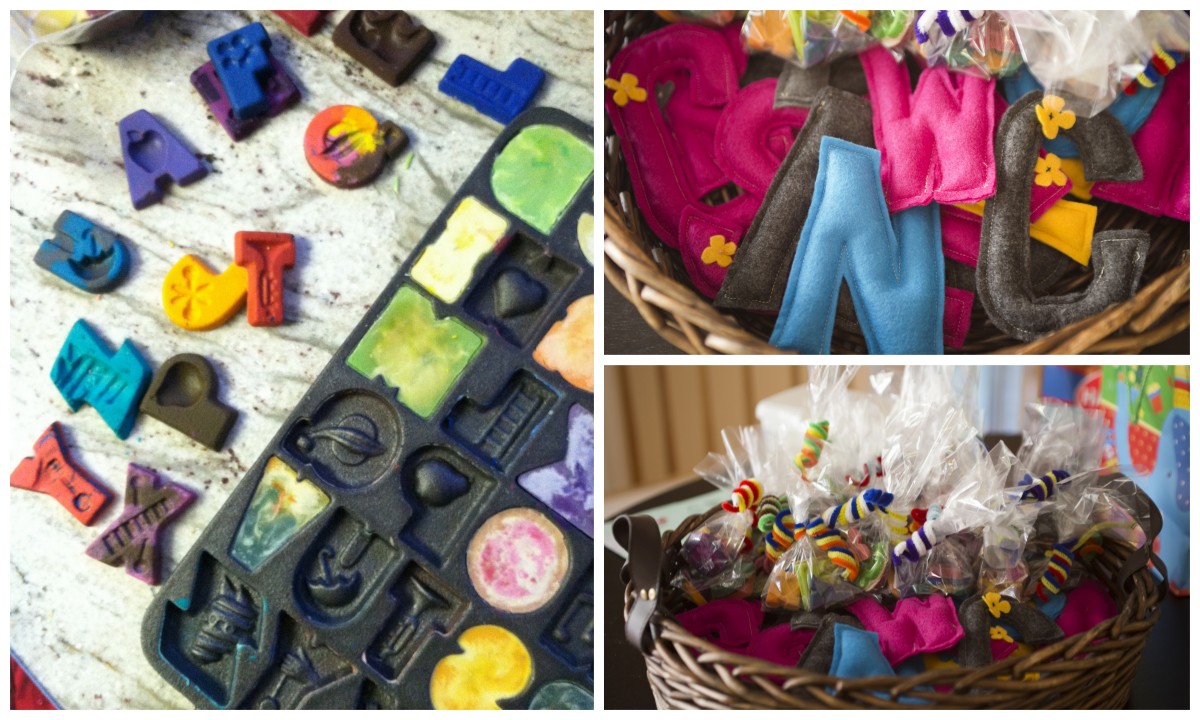 I made cupcakes and displayed them on the buffet with streamers taped on the wall behind them. I had never really thought of taping lines of streamers on the wall with guided spin, but saw it on Pinterest. The detail I failed to add in my rush was a line of balloons or something at the top. You can’t see in my picture because I cropped it, but the top shows messy edges of blue painters tape.  Oops! The photo of Whitney is one we took at home earlier that week, turned black and white, and blown up to 16×20 for a cheap Costco print ($5.99). 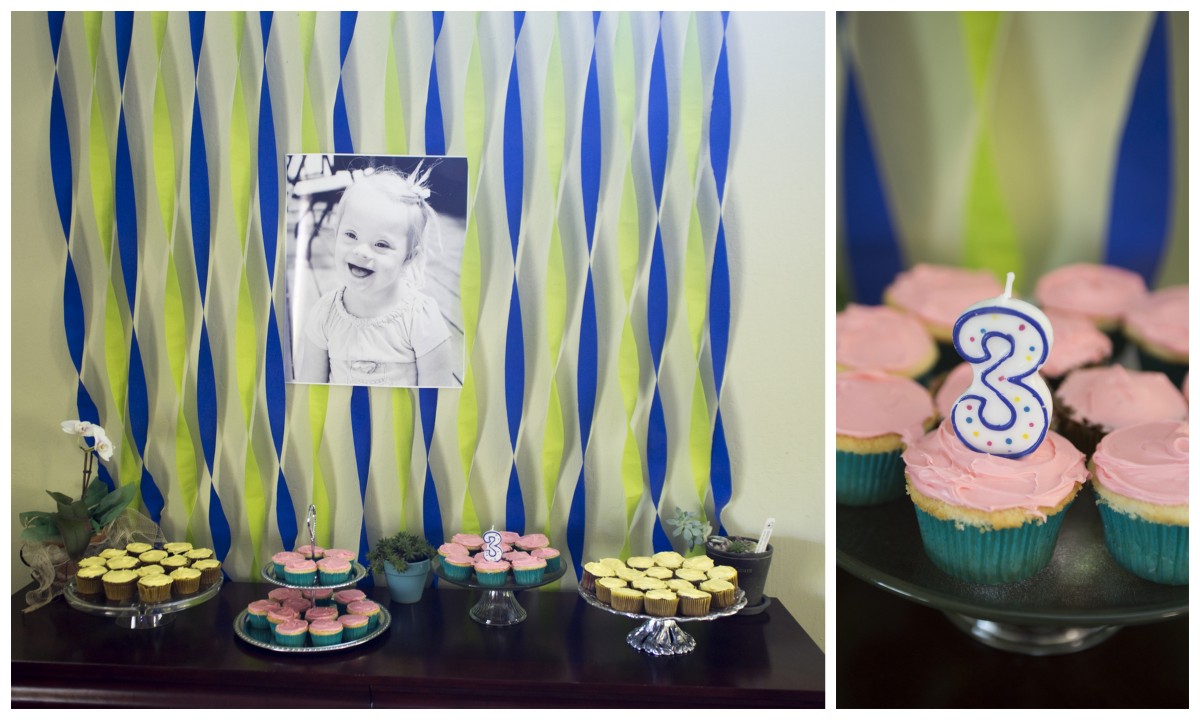 My baking takeaway is that it’s not good to overfill cupcake wrappers….they don’t puff up like muffins (at least mine didn’t) and spilling over the edge makes them hard to get out of the pan cleanly. Also, I burnt my first batch of chocolate for the chocolate muffins. I always have melted chocolate in the microwave just 30 seconds at a time stirring in between and this time I must not have paid close enough attention. I did 20s at a time for my second attempt with semi-sweet morsels instead of dark chocolate I used the first time around and all went smoothly. It kills me to waste good dark chocolate!  Oh, another thing to note….kids are drawn to pink frosting.  It’s the same as the yellow but the kids kept reaching for pink as if unsure that yellow would be as good. 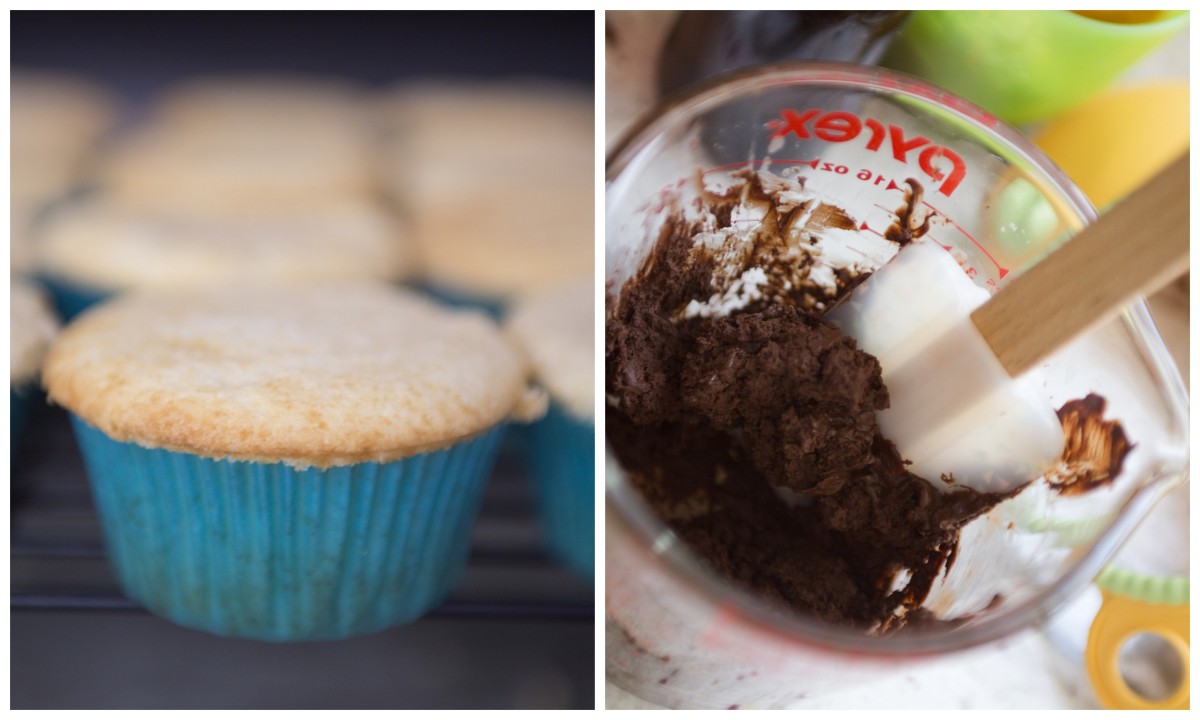 We played an Alphabet Game. I wrote letters on the ground with chalk and played music while the kids moved around. When the music stopped I called out letters and the kids standing on those letters got lollipops. Next time I’d make a specific playlist of songs that would really get the kids dancing around…my random old ipod did okay, but I know there were some better songs on there. 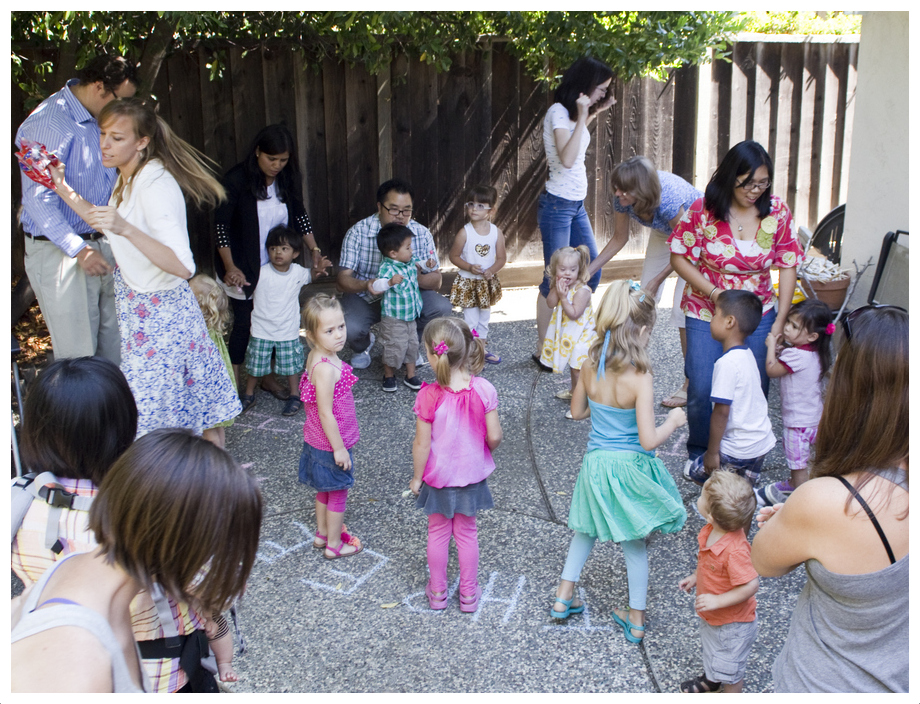 BONUS: Yarn Letters. I didn’t do these specifically for Whitney’s party, but they’ve been a favorite project of mine lately to give as gifts for new babies and Toddler birthdays.  I got the idea from a friend who had made a pink C for her newborn girl and had brought it to a photo shoot we did.  I loved it!  Especially the texture.  What a great decoration for a baby’s room.  When I was little I had my name painted in big pink letters on my wall and I learned letters and how to spell my name.  My mom says I would talk about “my M” with pride.  I definitely want my babies to know and love the letters of their name as well.  I also love that this is another affordable and simple craft.  Purchase the pre-made cardboard letters at the craft store and glue rows of yarn around it.  I chose to go all in the same direction….sometimes holes, like the middle of this A can be tricky, or curves of a B, etc.  Take care to tuck in the loose ends with some extra glue and ta-da!  Yarn letter. 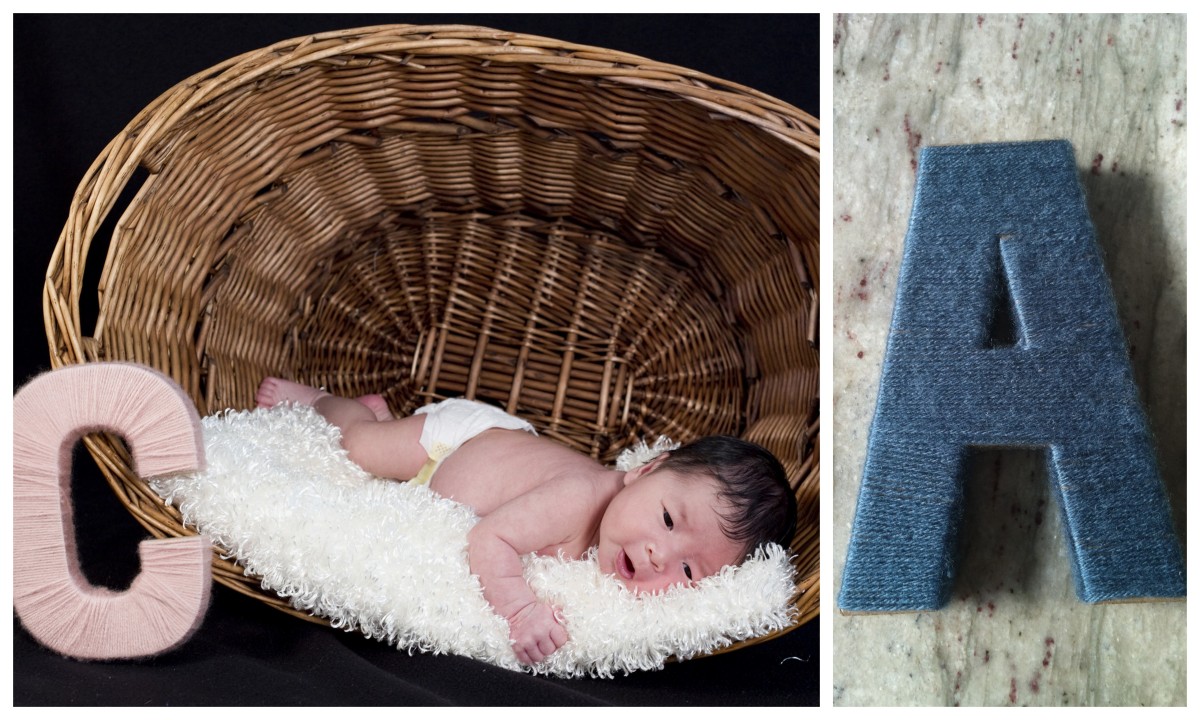