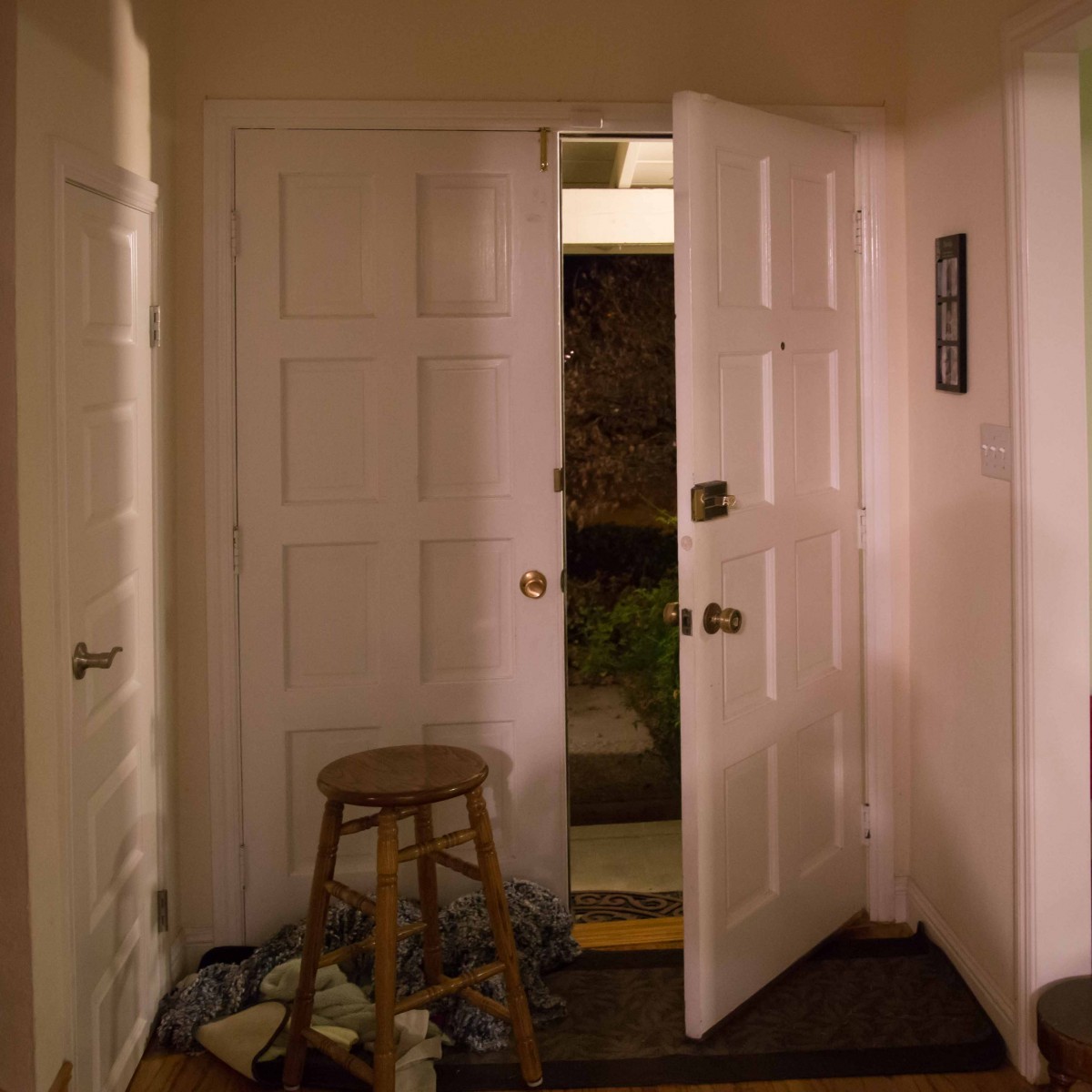 It was about 5:45pm, I had just turned off the burner where dinner had just finished sauteing.  I rounded the corner and saw this.

Whitney. Oh my gosh.  It’s deafeningly quiet, when did I see her last? hear her last?

I didn’t even look around the house, I yelled up to Tyler (who was working in the office upstairs) and ran out the door and down the street, around the corner where she usually goes like we do on our walks on the way to see the kitty. I don’t see her.  But it’s hard to see, it’s already dark out.

Oh God. It’s time for everyone to be coming home. In the dark. What if they don’t see her crossing their driveway?

I round the next corner where I can see down the long block….clear sidewalk, I can see a distance almost all the way to the kitty’s house.  But I don’t have my phone, I don’t know she’s that far.  What if she went the other way toward Colton and Easton’s?  It wasn’t an easy fix, better coordinate with Tyler.  I run back home and Tyler intercepts me at the driveway to say he checked the neighbor’s open garage and no sign.  She has gone there before, too (this isn’t the first time), that time she wanted to visit their dog and cat.

He jumps in the car and I run back inside with the other two. I keep bouncing between the house and the driveway not sure if I should load up the other kids and start another search party, I check the house more closely, turning on all the lights, opening the closets, and praying my face off.

A neighbor comes out to his driveway with a casual “how’s it going?” and I quickly enlist him to keep and eye on Dylan and Leslie while I go looking.  Pretty soon other neighbors come out and the teenagers, who have a few extra friends over, go running in all directions. My other neighbor checks the gate where there is access to a pool (yikes!), it’s closed.  I’m about to jump in my car and they call from the end of the court that they have her.  Praise Jesus. I’m holding the baby (who started freaking out when the neighbor walked in to watch her) and relief washes over me as I see my other sweet neighbor carrying her in the dark toward me. Aggghhh, Whitney!?  I’m relieved, and frustrated, and guilty, and embarrassed, and still stressed out all at the same time.

They found her on the doorstep in the next court over, the people who lived there were getting ready to call 911 because what else would they do?  Whitney doesn’t know her address or her phone number.  I’m not even sure if she would understand and answer correctly what her mom and dad’s names are.  It’s not that I haven’t thought to teach her these things, she’s just not there yet to provide this information without help.

Guys, this was terrible.  I mean, in the end we found her…after what seemed like forever but was probably 10-15 minutes.  But it’s so frustrating and scary because she bolts from us quite often – not because she’s troubled and wants to escape or anything, but rather something more like she likes to be chased and taste freedom/independence, or gets an idea and doesn’t think to ask us first.  (This time when I asked her where she was going she said “I go to Cadence” and other times it’s been the beach or Gramby’s house).  Her running has seriously influenced my comfort zone with the kids.  I don’t take more than 2 of them shopping.  If I do take her shopping I have to go where she is in a cart or a stroller (I’ve had to drop merchandise and leave behind another child to chase after her running full speed out of a store before).  It was a long time that I never took them to parks because I could have two running in opposite directions.  Fortunately now I can trust Dylan to stay put so that’s not as big of a deal anymore.  She seems to love to run away at our church – she is attracted to the stairs and loves to escape down the hallways.  If we chase after her yelling stop/wait/freeze/uh-oh or anything she laughs and runs faster.  It’s maddening.  We have to be on her constantly, and God forbid we get distracted or we’ll all of a sudden look up and see her 50 feet away (or disappeared completely).  We have tried so many different strategies.  She has an aide at school almost full time with the main reason being that she has wandered away a handful of times at school and it’s clearly a safety issue.  Even though it doesn’t happen all that often, she can’t be trusted on her own.

I’ve learned that bolting is likely one of the party favors of the extra 21st chromosome.  In one article (Social development for individuals with Down syndrome) based on parent surveys, 52% of children with Down syndrome between ages 7-11 years have difficulties with running away, it is still 18% for ages 11-20 years!  We aren’t even in that first age bracket yet!  I have been hoping for a long time that she would just grow out of her wandering and learn to stay together but with this recent scare and now these daunting numbers, I realize I can’t just count on change happening soon.  So I’ve been looking up more resources.  I found a helpful blog by a mom of a bolter with special needs.  With her prompting and some ideas on my own I’m looking into making Whitney an ID tag for her to wear all the time.  We’ve continued to put our house on lock-down (we had already relocated our garage openers, now we fixed our front door so Dylan can’t open it – that’s what happened this last time, he wanted to check the mail and left the door open). I also started researching tracking devices.  The mom on the blog suggested Behavior Therapy, which I’m not sure I’m ready for but would possibly help, or maybe adding it to her IEP (although they already work on it constantly at school).  What else…a leash?  A herding service dog?

A few years ago one of the families on the Silicon Valley Down Syndrome Network shared that they had been on America’s Super Nanny – I remember watching it and seeing their child with Down syndrome bolt and being intrigued with how the Super Nanny helped the family….we’re not quite at this stage of bolting, but if you want a window into bolting frustration it’s an interesting episode.  (Episode here)

After the bolting we talk with Whitney.  She is quite verbal for her age with Down Syndrome.  I am talking constantly about how we “stick together” and “stay close” as important reminders.  And when I tell her it makes me sad when she runs away or that I was so worried because I didn’t know where she was, she watches me seriously and repeats me.  I know something sinks in because often the incident comes up later that day.  She say “mommy’s sad, so worried” and “run away” and “listen and obey” (among other words that often aren’t always clear enough to make out). We give the kids an opportunity to pray at the dinner table and at bedtime and she always opens up into a soliloquy of blessings for the family and sound bytes from the day – which has included the same words about running and mommy being sad and so worried.  If only her understanding translated into changed behavior.

I think often I care a lot about sharing the wonderful things about our lives, and the dimension and beauty that Down Syndrome has added to our family through Whitney.  I’m sure there’s something beautiful I could derive from these running experiences and paint them with glitter for you, but right now I just want to share this for what it is…for others out there who might be going through something similar (and have ideas for us!) and for those who might know us or someone similar and can learn and live alongside us through this super challenging aspect of parenting. 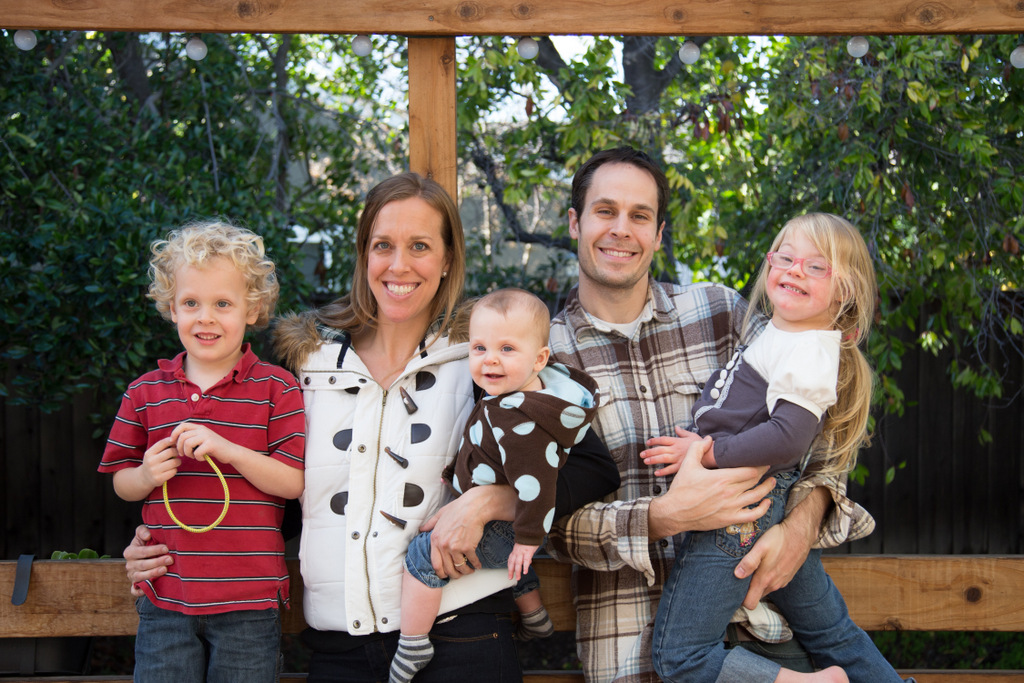